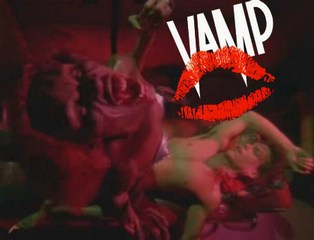 "Today, I was nearly hung. I got into a fight with a psychotic albino. I ate a cockroach, my best friend disappeared, and then I'm nearly assassinated by a runaway elevator. I've had a bad day."
— Keith
Advertisement:

The film follows college students and best friends Keith and AJ, who, while trying to pledge for a fraternity, head out to find a stripper to dance for them. Their search leads them to the wrong side of town and a seedy stripper bar. There they find a stunningly beautiful stripper, Katrina (Jones), and settle on her as their main choice. However unbeknownst to them, the bar as well as the whole section of town is run by vampires. AJ finds this out first hand when he tries to convince Katrina to come dance for them and ends up as a meal for her instead. Keith meanwhile searches for his missing friend and slowly starts to realize that something isn't right with the town's patrons. Along the way he runs into a waitress working at the club, Amaretto, who joins in on his search as the two try to survive the night.

Scene from the 1986 film, "Vamp!". Keith, after being run around all night, finds his friend AJ. However after narrowly avoiding a vampire attack, AJ has some... distressing news for him.

Scene from the 1986 film, "Vamp!". Keith, after being run around all night, finds his friend AJ. However after narrowly avoiding a vampire attack, AJ has some... distressing news for him.