An adaptation of The Batman Adventures' holiday special issue containing a series of vignettes. 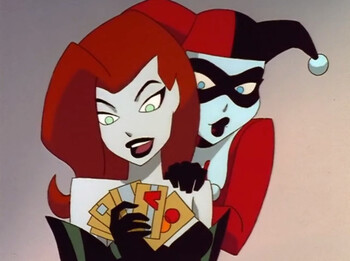 Harley Quinn and Poison are hiding out in a filthy hotel. A depressed Harley bemoans that they have to spend their holiday this way and asks if they can at least get a Christmas tree.

Ivy: What?! And support the mad campaign of botanical genocide that grips this country every December?
Harley: But Christmas trees are so bright and fun and pretty. Oh, please, please, please...
Ivy: (muffles Harley with a pillow) Calm down, Harl. I've got a little plan that will make this the happiest holiday ever.

At the Vreeland estate, Veronica asks Bruce Wayne what he has planned for the holidays and who he is taking, to which Bruce says he plans to spend Christmas alone. Just then, several women try to kiss him under the mistletoe. A shadowy female figure grabs Bruce and kisses him, leaving him dazed.

As Bruce heads out, Harley and Ivy lure him into a car, and Bruce cannot seem to resist. They reveal that Ivy used a special chemical-laced lipstick on Bruce at the party that makes him unable to resist their orders (they also used it on their driver) and they plan to use him to go on a shopping spree. Arriving at the Bergduffs Department Store, Harley and Ivy shop endlessly, buying various clothes and jewelry, while an enraged Bruce helplessly pays all the checks.

The chemical starts to wear off and Bruce begins resisting. As Harley prepares to give him another dose, he backs away and falls down an elevator shaft. Shocked at first, the two shrug it off and leave.

As the two drive off, they discover Batman is chasing them so they head for a toyshop. Batman searches through the pitch black and sees them atop a citadel of toys. He climbs to the top but they knock him down and flee, but Batman uses a grappling hook to send a large Christmas tree toppling onto them. 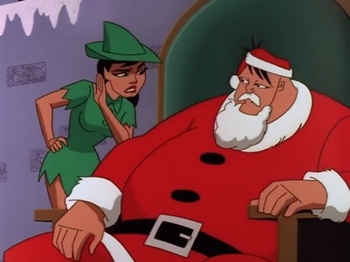 Barbara Gordon is at the mall purchasing a tie for her father. Detective Bullock and Detective Montoya are on a stakeout, with Bullock playing Santa Claus — and he is not good with kids. He does however show a soft side for Mary McSweeney, a girl whose father he arrested.

Bullock: Listen, kiddo, it's like this. I'd like to help you out, but what I mean is... (sighs) sometimes even Santa can't make every wish come true. (gives her some money) Ah, here kid, buy yourself something nice.
Mary: (hugs him) Thank you, Santa! Can I buy something for my daddy, too?
Bullock: As long as it ain't a hacksaw, why not?

Barbara spots a child shoplifting and grabs his hand but as he runs off his hand dissolves into nothing. Montoya gets a call that there are four young shoplifters and she and Bullock give pursuit. Cornered, the four kids suddenly meld together — it is Clayface. Barbara quickly changes into her Batgirl costume and attacks him, sending him out the window into an ice skating rink. Bullock and Montoya arrive and Batgirl tells them to shoot down a Christmas display on Clayface, which shocks him into unconsciousness. Afterward, Bullock has to recover evidence, much to his dismay. 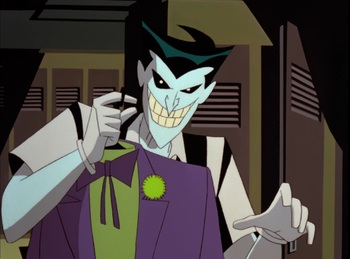 The Joker sent a broadcast claiming that his New Year's resolution is to not kill anyone for a year — so he plans to kill as many people as possible tonight.

Joker: A countdown of victims that will end at midnight unless our dear Dark Knight stops me first!

As Batman and Robin review the broadcast in Commissioner Gordon's office, Gordon says the only known victim so far was John Erickson, a GothCorp scientist specializing in Sonics. Dr. Erickson was working on a sonic weapon powerful enough to kill anyone within earshot unless wearing special mufflers. Batman deduces that the Joker will set of the bomb at the New Year's countdown in Gotham Square.

Sure enough, the Joker is there, and his goons, Mo, Lar, and Cur, have set up the bomb to go off when the bell reaches the clock. Knowing Batman will eventually show up, the Joker prepares several Joker masks. Batman and Robin arrive to find that everyone is wearing Joker masks. Batman spots the real Joker on the stage and they swoop in and fight off his henchmen. However, the Joker bashes Batman's head with a container of champagne and one of his goons gets a hold of Robin.

As the bell is rising to ring in the New Year, Batman grabs a champagne bottle and sprays the controls but Joker shoots him in the arm. Nonetheless, the controls short-circuit and the bell falls down onto the Joker (who weakly says "ouch").

It is January 1, 1:55 AM, and Gordon arrives at a tavern. The barkeep thinks Batman might not show up after a rough night, but Gordon is sure Batman will not break tradition. Batman then enters with a bandaged arm (from Joker's gunshot) and sits down with Gordon. They sip coffee and chat, and then Batman vanishes, leaving behind the money. Gordon heads home as Batman swings off.

Gordon: One of these years, I'm going to beat him to the check.