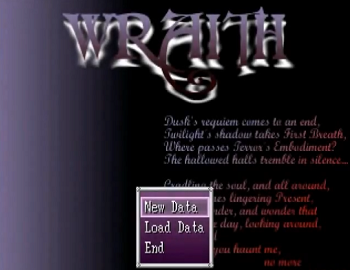 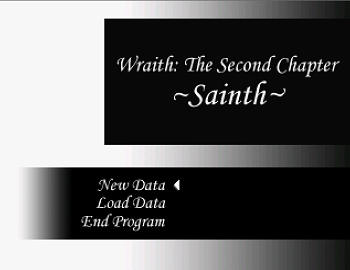 Dusk's requiem comes to an end,
Twilight's shadow takes First Breath,
Where passes Terror's Embodiment?
The hallowed halls tremble in silence...
Cradling the soul, and all around,
Past becomes lingering Present.
And I wander, and wonder that,
Maybe one day, looking around,
I'll find
you haunt me

Wraith is a freeware game made in 2005 by Neo Kuriyo, or Neok as he is known on the RPGmaker.net forums. It's a horror-based Adventure Game made with RPG Maker 2003, and was Neok's first game on the site. It can be found here.

It is set in Australia, where you play as a girl named Kana, who peruses through the darkened manor, tracking down the servants and students before the titular wraith can get to them. Once this is done, she needs to discover a way to destroy the soul-sucking entity on the loose. This must be done before daybreak; your success or failure results in a good and a bad ending, complete with unlockable cutscene CGs for certain events in the game.

The game received a short sequel in 2010, Sainth. It shifts the focus of the story to Lily, Kana's best friend, and takes the plot in a very different (and oftentimes confusing) direction. It can be found here.

A third game, Candice, was originally planned, but seems to have been cancelled.

Tropes used in the sequel, Sainth: