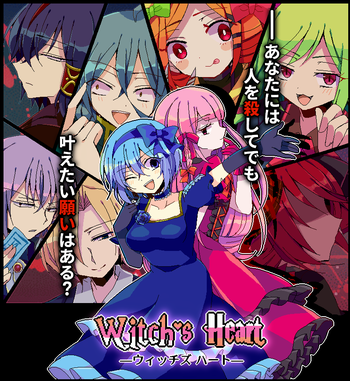 Witch's Heart is an adventure game by IZ (BLUE STAR Entertainment) made in RPG Maker 2000. It's a story-focused game with some light action, horror and puzzle elements. While it stars a heroine and four of her co-residents who each have a route of their own, it’s very far from romance-focus, and for what reason you may find out quite soon...

Claire Elford is a cheerful girl playing in her favorite flower field deep in the mountains of Ribecca. Cue the Rain, and now she need to find shelter to hide from the passing shower.

She then finds a mansion deep in the woods and ran into Ashe Bradley and Wilardo Adler, who are also caught in the rain. While exploring, the three find monsters roaming about in the hallway, as well as no way out of the mansion. They also met two other people, Noel Levine and mansion owner Sirius Gibson, and the five decide to work together to figure a way out.

Just as things got even more confusing, Claire finds out that she's in a Demonic Pact with a demon named Zizel, and that the legendary wish-granting treasure, the Witch's Heart, is hidden somewhere in the mansion. But they then learn of the Witch Dorothy, who is said to have owned the mansion and perpetrated a massacre long ago, and summoned the monsters and demons to make the travelers her next victims in order to protect the Witch's Heart that she holds. The five must now explore the mansion and it's fantasy spaces to figure out how to escape. But as Claire finds out, the others have learned of the Witch's Heart as well, and have come to the mansion to acquire it themselves, each for their own reasons. And as Claire is about to find out, there is much, much more to the story and the mansion than what it may seem...

Currently, it is comprised of 4 main scenarios, which are about 3 hours each, corresponding to each of the four men; a "Bonus Stage", and Sirius' route conclusion. Gameplay consists of exploring the mansion while defeating monsters and completing requests for the friendly troubled demons around the mansion.

An English translation of the game can be downloaded here

Take me back to that time, please,
When we cuddled up, just us two
Hold yourself tight to my chest;
And never, never will I let go...
Never, never can I forget...