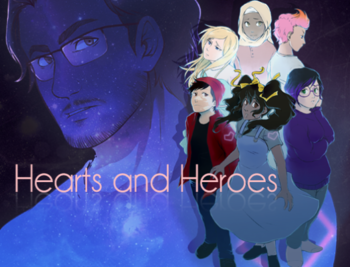 "This is the hub. Or, as some people call it, the Markihub. Hey, I'm staying on brand, alright?"
— Markiplier

Or so she thought.

One night, her life takes a turn from ordinary to extraordinary when she finds herself in a mysterious place and Markiplier himself materializes in front of her. With no time to explain, he takes her to a Hub where it turns out he's leading a group of heroes who save people from their own nightmares. The creatures in the nightmares, called the Terrorlings, well, terrorize everyone. And it's up to Blue to find and rescue her own group of new heroes. Will Blue be able to rescue them all?

Developed by a small team over two years, Hearts and Heroes is a Markiplier fan game that was released in August 2017 and was an instant hit with the Markiplier community.

The game is available for free on Gamejolt