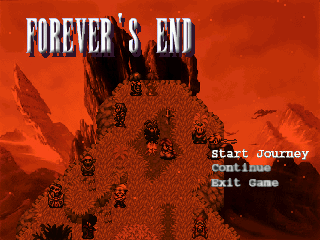 In development since 2008, NicoB's freeware RPG Forever's End at first appears to be nothing more than a standard Eastern RPG. Most of the story revolves around the power-hungry King Richard, his sinister advisor Marcellus, and the the blue-haired protagonist Epoch. After resigning from his position as Captain of the Dragon Knights and being labeled a traitor by his countrymen, Epoch must find a way to stop King Richard from collecting the six legendary crystals and ruling the world.
Advertisement:

That means this is essentially Final Fantasy IV in a nutshell. Good news is that it plays a lot better than it sounds. After the first hour or so, the RPG tropes begin to settle down, and Forever's End becomes more its own beast. In addition, the game offers players plenty of custom systems, plot twists, original artwork, and catchy tunes to keep any RPG fan hooked for hours.