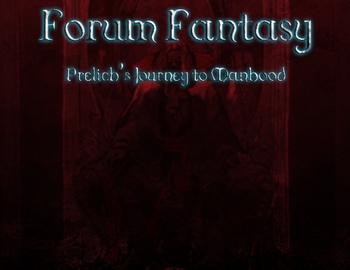 Forum Fantasy: Prelich's Journey to Manhood is an RPG Maker VX game developed by Camelslayer. It was in development for around a year and a half before its release date on November 1st, 2012.
Advertisement:

The game takes place in a forum known as the Chaos Theatre. A war between the administrators and the moderators has broken out. There used to be roughly thirty mods, but now only four remain. Prelich is one of them. After awakening in an icy cave, he's told by super moderator Camelslayer to hunt down and ban the administrators. Upon his journey, he is joined by bruiser mod Magnum, magic-user mod Vlarix, and (about two dungeons later) demoted mod Tambot in order to take down the rulers of the Chaos Theatre. The not-so-stalwart quartet soon embark on a very silly adventure parodying early RPG games.

The game is, in fact, based around an actual forum called "The Chaos Theatre", which ran from 2011 to 2017, and all of the users, moderators and admins featured in the game are based off select users from the actual forum. Despite this, knowing the forum's history is not required to fully enjoy the game.

The game also features guest appearances by Youtubers "The Autarch of Flame" (who played a substantial role in marketing and providing ideas for the game to further its development),"Joshscorcher", and "rabbidluigi" among others.

. Downloads of the original VX version previously existed, but those links are dead as a result of the Chaos Theatre forums being shut down.

Now has a Shout Out page that needs new additions. And now it has a drinking game with multiple versions!

Due to a certain plot point half-way through and the fact that trope names themselves have to remain unspoilered, several spoilers are ahead. Viewers are advised to keep that in mind.