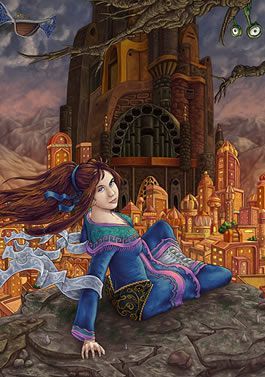 Travel between the worlds of Aëdemphia.

Aëdemphia is an independent French freeware game, developed with RPG Maker 2003 for PC.

Its creator, Sylvanor, describes his game as a fusion between Western RPG (freedom of action and of choice, plenty of sidequests, roleplay with your main character, the possibility to resolve fights with stealth or diplomacy, freedom in the evolution of the statistics of the characters) and Eastern RPG (presence of an overaching plot, party members written into the plot).

The game allows you to play Irzyka, a White Magician Girl whose personality will entirely be determined by the player's choices. The game begins when Ufa, with the help of his mentor Egaj and his friend Irzyka, is about to fight his last battle against the "Heartless Soul", a bloodthirsty tyrant who terrorizes the world of Estarzall. However, during the battle between the two armies, Irzyka gets sucked in an explosion. She survives but, without knowing how, she's sent into another world: Akzalfir. Trapped in a foreign world, Irzyka will try everything she can to discover what happened to her, to return to Estarzall and to find her friends. On the way, she will befriend some new companions and meet various people.

During her journey, she will discover that a terrible and powerful enemy threatens both Estarzall and Akzalfir. Jumping between the two worlds with her friends, she will try to stop this threat. However, the fight may be more difficult than she expected, as this strange man claims to have a connection with her. Who is he in reality? Why does he claim to know her? And, more importantly, why doesn't she remember him?

The plot may be a little classic sometimes, especially in the beginning, but it has some neat twists. The main strengths of Aëdemphia are its characters and (especially) its atmosphere. Irzyka's companions all have their own personality and the player has the possibility to converse with them in order to befriend them and to reveal their Hidden Depths. All the sprites, settings and landscapes have been drawn by Sylvanor. This gives the game his own unique style. Akzalfir and Estarzall have their own setting with its own history, geography, customs, species, climate, religion... Each town has its particularities that set it apart from other towns. The amount of details put in the construction of the universe is massive.

You can find the official website (in French) here

and the trailer of the latest version here

. The game isn't finished yet, but the current version covers a good two thirds of the plot and gives a very good idea of what the finished version will look like.