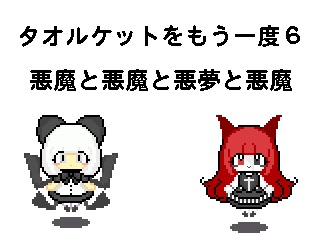 The Title screen for Towelket 6
" Towelket (a portmanteau of "towel" and "blanket") A type of bed linen resembling a large beach towel and used in Japan to cover oneself in hot weather."
Definition of a Towelket
Advertisement:

Towelket: One More Time (タオルケットをもう一度) is a series of doujin RPG games made on RPG Maker 2000 by Kanashimi Hocchikisu (かなしみホッチキス). With combat style and exploration similar to Earthbound, it features cute characters, and solid story-telling. Most of the games deal with alien invasions (with one exception). There are 7 main titles, with 3 spin-off games, that are slightly related to the main series.

Each of these games shares a general plot. The planet gets invaded by aliens, and the main character and his or her friends defend their home from said aliens. If there are no aliens present at the time, then the town is instead "invaded" by or infested with random animals.

An anonymous team has been translating the series.

Because of a loss of interest in making games, the developer of these games cancelled the series on May 28, 2014. The author also lifted the "embargo" on the series, and people are permitted to publicly upload videos featuring the game.