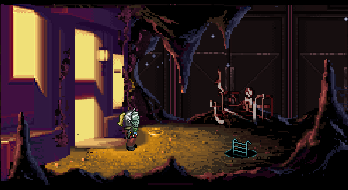 "The rift is vast, and its denizens horrid."
"The Rift does not know what it is. It does not even know if others like it exist. Us, though, it will certainly learn to cherish."
—Genie
Advertisement:

is an RPG Maker game by indie developer "myformerselves"

. Playing as a figure known only as "The Nomad", who flees his home dimension when his beloved culture dies via assimilation, you find yourself in an area called The Rift. The Rift is essentially the scrap yard of universes, where all the dimensions or parts of dimensions that were unwanted or broken are sent to rot. A world of anarchy, every being in The Rift is an immigrant who fled their home dimension, taking a chunk of it with them. These chunks are held together by the silk of worms known as "Virmis", and as a result, the game world appears as a mishmash collage of clashing art styles and sources that range from classical paintings to hellish pink Atari sprites.

Its plot is minimalist: As you enter the rift, a talking gun known as “Genie” offers her assistance. Now bound “like notes to a song” she informs you of your quest. The rift is sick, and the only cure seems to be to purge a chunk of its residents. Who you kill and how you justify it to yourself is entirely up to you.

In the case of the combat, most fights are initiated by the player and the enemies’ stats are hidden. You could very well challenge a boss that’s completely beyond your power level and not know it until you are already dead, which makes every fight foreboding. Its karma system is unique in that ALL killing is wrong, even in self defense (though self defense is less bad), and it's impossible (barring the services of one EXTREMELY hard to find character) to get rid of the bad karma (called “Nothings”) once you start to collect them. As you accumulate more Nothings, the denizens of the rift will start to treat you differently or become hostile.

In the case of the latter, most characters have dialogue cobbled together from occult books, celebrity quotes, short stories, the last words of death row inmates, and the occasional shockingly lucid comment, that only enforce the alien atmosphere of the Rift. Most memorable, however, are the discussions held with Genie over the course of the story. As you gain more and more Nothings, the talking gun will hold discussions about philosophy, ask you existential questions, mock you, urge on your bloodlust, try to creep you out, hit on you frequently, and try to speak Spanish

Received a successor of sorts in Gingiva. Implied to be a prequel to Middens, the game follows a woman with a turnkey for a head rebelling against the governing aristocrats while being guided by a talking set of dentures. The setting is as odd as Middens, though with a more consistent art style for the environments. Originally slated for February 2013, it didn't release until September.