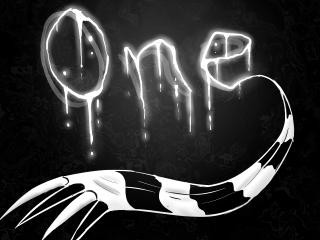 In the end, One stands tall.
"Using the Elements given to me by the Batter, I somehow managed to create life. Do not be fooled however. This is not my story... It is his."
—Zacharie
Advertisement:

ONE is a fanmade sequel to the video game OFF, created by BlackFire64

The switch has been flipped to OFF, leaving the world a desolate wasteland. Zacharie, one of the few remaining survivors, tries to survive in a harsh environment surrounded by monsters. In the midst of his loneliness and madness, he uses the Grand Elements the Batter has given him to bring another person into the world to keep him company. Thus Doux is born.

Life is hard but happy once Doux has come into the world. However, four years later, Zacharie is kidnapped by the monsters and Doux must save him. Along the way he enters the Zones, where nothing much has changed, except that the Elsens are now spectres and are much less skittish. However, demons have set themselves up as the new guardians and are trying to take over the Zones. With everyone else dead, Doux is the only one who can stop them.

This game is still in the works.

ONE provides examples of: