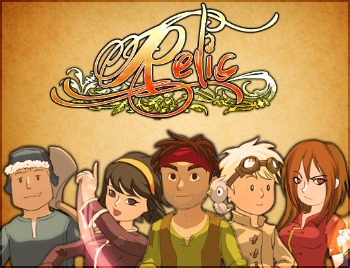 Relic is an in-development fantasy RPG created with RPGMakerVX by Twidger (also known as just Twidge on RPGMaker.net) and helped by a friend of his. It stars a drunken thief, his cocky bird which only he can hear, a struggeling young magician girl, a pyromaniac, an anti-social engineer boy who makes bombs, and a Russian lumberjack. Interested yet?

The Relic. Handed down, generation after generation by the royal family, Its purpose is unknown to anyone. It is said, that during the Meteor Shower that occurs once every five years, if the girl with the pure voice sings the Song of the Seas, then the Relic will reveal its purpose. This girl, is Annette. King Gaston III, requests that she be brought across the ocean, to his kingdom in the New World, for the celebration of the Meteor Shower. She brings her boyfriend Scatto, a drunken thief, his best friend, Antoine Vivinci, and Scattos pet bird, Peeko. However, while out at sea, their boat gets attacked by a fierce storm, and the ship begins to go down. Anette, Antoine, Scatto, and many other people make it to the life boats, but when they go to launch it, one of the ropes gets snagged in the mechanism. Scatto quickly climbs up the rope, runs into the ship, gets a knife and just as he gets back to the rope, the ship starts sinking! There is no time to climb aboard the life boat, he cuts the rope there and then the boat is released. Scatto struggles to get to the boat but the waves are too rough; he does not make it. He wakes up, days later, shipwrecked on an island.

And that's just the prologue.

A demo was released in late May 2011. Since then, Relic has already gained much support from the RPG Maker community for its humorous dialogue, impressive voice acting, original soundtrack and original artwork.

Tropes that apply to Relic