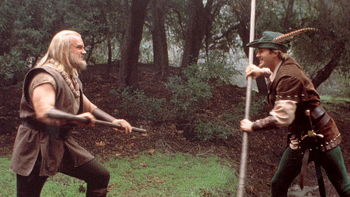 For those "important" fights.
"Simple wooden staff
Made from life, protecting life,
Stronger than cold steel."
— Flavor Text from the Magic: The Gathering card Silkenfist Fighter

Behold, the staff. Essentially nothing more than a long, wooden club, it is one of the simplest weapons known to man, yet frequently referred to as the deadliest melee weapon ever created. (In other words, it's the king of Boring, but Practical.) It can be easily improvised from a number of ordinary farming and cleaning tools — such as plows, rakes, or mops — that are readily found anywhere. Those who frown upon spilling blood can confiscate various polearms and snap off the pointy end(s) to suit their tastes. Even convenient tree branches can serve in a pinch.

However, not all staves need be so simple. A few war-staves are shod with blunt metal caps for harder strikes and bound with iron rings to better parry swords. The violent potential of especially these iron-shod staves cannot be overstated, as when wielded properly are quite capable of shattering bone, denting and deforming armor, and completely removing vulnerable areas such as the jaw.

Many double as symbols of status and thus feature elaborate headpieces — of which the wisest choices are sturdy and heavy enough to serve in a fight. Some clever individuals have made staves out of hollow metal pieces that can collapse into a concealable weapon.

In the West, a full-length fighting staff is called a quarterstaff. Contrary to general opinion or many movies, in the medieval age, a staff was not held in the middle but wielded in a similar way to a spear or two-handed sword.note With one hand halfway up, the other a few feet further back to provide more leverage and the rest of the staff ahead of them. One should note that it is hard to find a consensus for the length of the quarterstaff, which ranges in description from six feet to more than double that. In Japan, it is called a bo, with a smaller version called a jo. The Japanese also have hanbo — short staves that Westerners would call rods. A Filipino fighting art called Eskrima (or Arnis or Kali, depending on which island you're from) also makes use of these short rods.note An interesting side-note is that eskrima teaches its practitioners to strike with one particular surface of the stick rather than just any part of it — because eskrima is intended to allow the user to switch his relatively non-lethal sticks for blades if necessary.

Staves tend to be the Weapon of Choice among monks and others who, for moral, religious, and/or ethical reasons, refuse to take a life, but for various reasons find themselves requiring a method of defence. Anyone else interested in practising combat skills is more interested in lethality, and so affix various pointy ends to their poles, making these implements a different kind of weapon entirely. Of course, some people take a middle path and conceal various nasty surprises in their staves.

Staves also tend to be the favorite of particularly old and weary characters in need of a walking stick — or those who wish to appear older and wearier than they really are. As such, it is a favorite among Old Masters and certain kinds of wizard. In the latter case, the "simple" staff probably also doubles as a Magic Wand, thus becoming the hybrid melee and magical weapon, the Magic Staff. Staves work great for teachers because a) they don't look impressive, and thus when they kick your ass it's a demonstration of the user's skill, and b) staves provide ample opportunity for hard whacks to the shins or head — painful, but not fatal, blows — thus perfect for discipline.

These connections to the monastic, the mystic, the elderly, the traveled, and the sorcerous have lent the staff itself, and those who use it, a certain image of being intellectual, knowledgeable, and wise. Whether this is any more real than the image of frailty is another matter, but more staves in fantasy are Magic Wands than Magic Wands are staves. If the Magic Wand aspect of the staff is limited to only shooting people (or, if said shooting from a staff is not even magical in nature at all), then you have a Boom Stick, rather than a Magic Staff.

In Eastern media, the staff is often a Kung Fu weapon, used with much grace and skill (and choreography). Combined with the distance afforded by its long reach, martial artist monks have long been able to smack around roomfuls of Mooks completely untouched. As Western audiences rightly recognize the awesomeness of this, it's spreading to Western media as well. The most famous user of the staff in Eastern media is Sun Wukong from the seminal Journey to the West, and thus most staff-users reference Wukong in some way, especially through his not-so-simple staff, the Telescoping Staff, a related trope.

When the fighters don't actually care as much about the injuries they inflict or actively try to cause lots of injuries, perhaps the staff really is just a long club, or a spear without a spearhead.

If the wielder is a martial artist, expect to see a particular special defensive trick. The same trope applied to ridiculous extents is Wooden Katanas Are Even Better. A Broomstick Quarterstaff is an improvised variant.