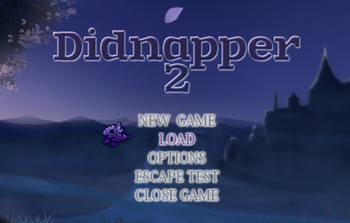 Didnapper 2 is a fan-funded RPG Maker game and the sequel of Didnapper, developed by DID Games, the same developers of Bonds.

Originally announced as a pirate-themed spiritual successor to Didnapper named Silk before becoming a full-fleged sequel after a few months of development when the lead designers felt the game was too similar to Didnapper.

For those that aren't familiarized with Didnapper; it's a RPG Maker game that focuses on softcore bondage and Damsels-in-Distress in a medieval fantasy setting. Had a lot of Fanservice, Lampshade Hanging and damsels in distress.

Set in the same unnamed world of the first game and starting Seles: an Aeon, which is a type of natural magic user, who works as a problem fixer in her hometown of Bellia in order to help the townfolk and make a living while at it. However, after confronting her childhood rivals/town bullies, she's kidnapped by a mysterious female pirate and taken away on a ship.

Why she was kidnapped? Who's the Female Pirate? Where is she being taken? How's she going to escape? Only time will tell...

Currently the game is still in development and a public Demo containing Chapter One has been released with more to come in early-2020. The final game is expected to be released sometime during 2020 and, unlike the first game, it will be a paid release while also being given to major Patreon supporters.