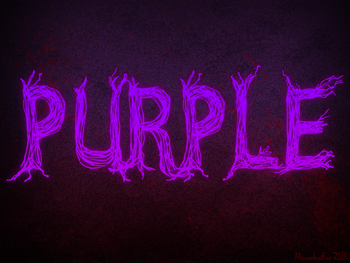 Purple is is a horror RPG created by Masochist Fox with RPG Maker VX Ace.

Randall Purpura is a person who’s been discharged from hospital for unknown reasons. He has two neighbours nearby that he’s eager to acquaint with, although before getting to know them, he’s visiting the hospital for more pills. As the days pass and the pills run out, the already unstable Randall starts going further and further down the rabbit hole...

Not to be confused with another game also called Purple. See also The Phobia Project sequel, also made by Fox.