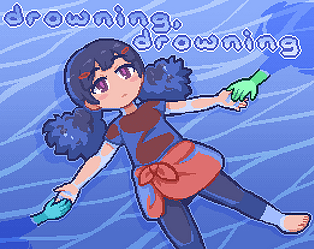 drowning, drowning is an RPG Maker game made by NomnomNami. It is the story of Maia, a young girl who dives into the sea, makes her way through the kelp forests, and meets the friendly residents of an underwater city... but was she really invited here just for fun? Or was there some deeper reason...?