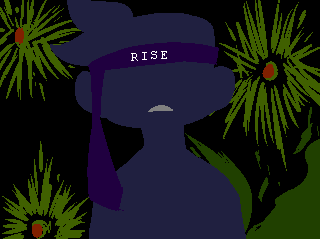 "I don't want to have to kill you. I just want you to treat the workers better, treat them the way you used to."
—Cinnamon Glaze

In a world of OFF where the Batter isn't real and the Guardians have turned into tyrants, an eccentric Elsen decides enough is enough and starts a revolution. He rips off his tie, wrapping it around his head, picks up his pickaxe and rises up to the challenge.

You are pulling the strings of Cinnamon Glaze, a fearless yet caring Elsen, who won't let the spectres stop him. Armed with his pickaxe, he travels through the Zones, standing up to the Guardians, and gaining new friends along the way. Together they aim to make life better for all the Elsen. But it won't be easy, they will face many obstacles, including their own people.

This is a fangame, made by Cinnamun (Brandy)

is set in the same world as, but is separate from, Mortis Ghost's OFF. The fangame, and its remake (in the works), can be downloaded here