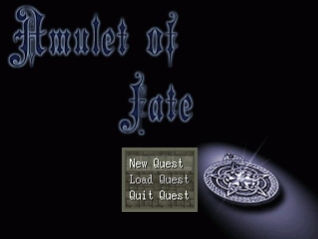 Amulet of Fate is a freeware RPG, which is being developed

You are Amaldia Victoria Theron, the princess to the Theron monarchy which is currently undergoing a coup by its villainous advisor, Vargas. You escape the castle and travel to the secluded continent of Melonia to research your innate powers of summoning. Utilizing this information you may return to reclaim your homeland from the traitorous Vargas and his men. However, not everything is as it appears and the story will take a few twists before the end.

The game will feature a variety of options to the player, including the ability to hire and fire several mercenaries to join your group as you see fit. In addition to the summoner class your character starts with, you can hire up to three other group members ranging from a Black Mage, White Mage, thief, warrior, blue mage, elementalist, and an alchemist. A magic system that allows users to share spells provided necessary items are in the party's possession. A weapon trait system not unlike Final Fantasy X where the type of enemy fought dictates the type of weapon most efficient against it. A monster scaling system which keeps the game continually challenging which effects monster drops and experience. A multi-party guild system similar to The Elder Scrolls IV: Oblivion where each guild has its own questline and story. Finally, a trophy system is in place which acts as a form of achievements for the game. It boasts a huge continent to explore with absolute freedom to go where you want, kill what you want and take on quests when you want. The are roughly 27 areas to delve into with over 70+ quests planned (not including the main quest) and 6-7 mini-games spread across the continent.

The current version of this RPG has been in the works for over 4 years but the overall concept and setting has been in production since 2001 where a basic introduction and opening quests were created but were scrapped. The game was to undergo two more revisions from scratch before being, again, scrapped. The most current version was started in 2008 and it seems this variant of the game will be what sticks. It had a 20-minute demonstration video

in 2015, but the release date is undetermined and progress is currently halted until other projects are completed first.