Characters / Captain Planet and the Planeteers

The characters list for Captain Planet and the Planeteers.

The Planeteers are five teenagers from five different continents, assembled by Gaia, the Spirit of the Earth to defend the world from pollution, criminals, and natural disasters. When the situation is too much for them to handle they let their powers combine to summon the environmental superhero, Captain Planet. They have a monkey on their team too.

Gaia, the spirit of Earth, is the protector of the planet. She brought the Planeteers to her home, Hope Island, to help her in the battle to save Earth.

A 16-year-old conservationist from West Africa (Ghana based on the name), Kwame is the group's level-headed voice of reason and de facto leader. Kwame's ring was of the element earth, used to create small, localized earthquakes; move rocks in the earth; cause holes or furrows in the earth for planting; create tiny islands by raising rocks from the shallows of the ocean; and turn mud into solid ground.

A 17-year-old street-wise smart aleck from North America (New York to be exact), Wheeler probably knows the least about pertaining to the environment, but his heart is always in the right place and he definitely has the most street smarts. While he has been known to flirt with other women, he developed feelings for Linka. Wheeler's ring was the element of fire, used to create tiny bolts of lightning or create and direct small fires.

A 16-year-old ornithology expert from the (former) Soviet Union, Linka is the team's no-nonsense strategist and computer expert. Linka likes to think logically, and use common sense when on missions, but has developed feelings for the impulsive Wheeler. Linka's ring was the element of wind, used to command it to swirl or gust, or create small tornadoes.

A college student of marine biology from East Asia (probably South Korea, given her name), Gi is skilled in high-tech equipment and, like Linka, is a computer expert. She is very passionate and protective of both ocean life and her friends and family. Gi's ring was the element of water, used to control any water source, creating small squirts to waves and water spouts depending on the size of the source.

A member of the Kayapo Indian tribe in Brazil, Ma-Ti is the youngest Planeteer at 12. Ma-Ti's ring was the element of heart, which enables him to communicate telepathically with animals, the other Planeteers, and Gaia. 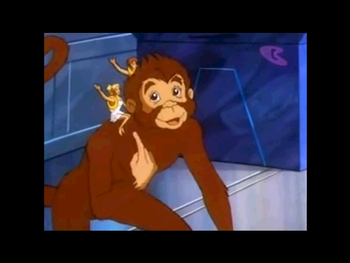 Ma-Ti's troublesome pet monkey, whom he had rescued before he became a Planeteer and from whom he received his ring.

The Eco Villains are a small group of villains and their subordinates who wreak havoc on the Earth with pollution, wildlife endangerment or shady business dealings. Many of them do this out of short-sighted Greed, but for others it's never explained besides the fact that they can.

A man resembling a pig who represents the environmental damage caused by the exploitation of natural resources and over-consumption.

A wealthy poacher and greedy businessman who represents the evils of uncontrolled capitalism, unethical business actions, and globalization.

An unscrupulous waste disposer who represents the harm caused by ignorance, short-term thinking, laziness, and the environmental problems caused by waste disposal. He is probably the most "realistic" of the Eco-Villains in that he seems to not be truly evil, but merely unconcerned with the environmental effects of his various schemes.

No, not that one. A radioactive mutant who represents the perils of nuclear power and ozone depletion. Also one of the few enemies on the show to have superpowers like the protagonists.

A part man, part rat creature who represents the evils of poor sanitation, disease, urban decay, and uncontrolled crime. Unlike the other villains, he tends to focus more on destroying humanity than destroying nature.

A Mad Scientist who represents the dangers of uncontrolled technology (specifically dealing with the military-industrial complex) and unethical scientific experimentation.

A former spirit of the Earth, who left Gaia in search of other worlds and ended up laying other populous planets to ruin. He is without a doubt the most dangerous of all the eco-villains because he represents the most terrible and destructive dangers of all: War, corruption, and hatred. 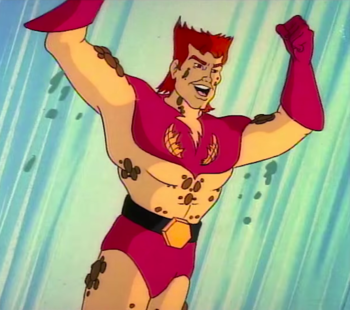 An evil counterpart to Captain Planet that is a result of the combination and magnification of the powers of rings of destruction created by Dr. Blight. He has the powers of super radiation, deforestation, smog, toxics, and hate and consuming and bathing in more pollution makes him bigger and stronger. He is defeated twice by Captain Planet; the latter may have been for good. 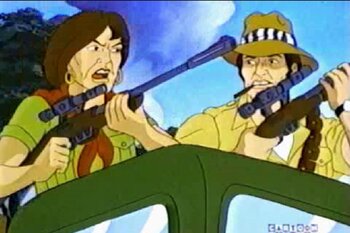 A family of poachers led by Mame Slaughter and her son and second-in-command, Stalker Slaughter, represents the dangers of poaching and hunting endangered animals.