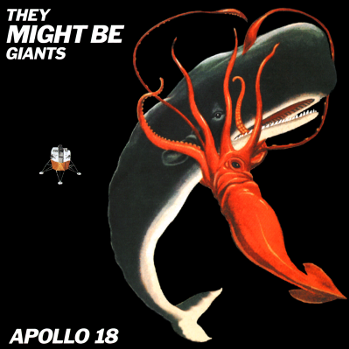 Someday, Mother will die and I'll get the money
Mom leans down and says "My sentiments exactly"
Dig my grave, dig my grave
Every time I look in your eyes
I see St. Peter wave
—Dig My Grave
Advertisement:

Apollo 18 (not to be confused with the 2011 sci-fi horror movie of the same name) is the fourth studio album by They Might Be Giants, produced by the band (but almost produced by Elvis Costello) and released in 1992 by Elektra Records. It managed to make the Billboard Top 200 list at #99, and stayed on the list for about six weeks.

The album's most notable track is "Fingertips", a series of 21 mini-songs averaging 13 seconds in length. It was intended to "complement the shuffle mode of modern CD players".

Here In The Hall of Tropes, You Look Through the Keyhole: