Series / The Haves and the Have Nots 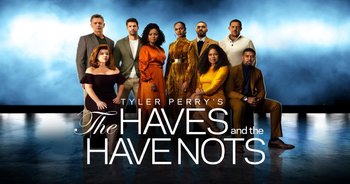 Tyler Perry's The Haves and the Have Nots (2013-2021) is a Prime Time Soap created by Tyler Perry (who also serves as executive producer, and has written and directed every single episode) which airs on the Oprah Winfrey Network (OWN).

Set in Savannah, Georgia, the show focuses on three families, two of which (the Cryers and the Harringtons, AKA the "Haves") are upper-class while the third (the Youngs, AKA the "Have Nots"note Celine is also counted as one of the "Have Nots") is working-poor, though the one thing they have in common is that they're all highly dysfunctional. Jim Cryer (John Schneider), The Patriarch of the Cryers and a criminal courts judge who aspires to become Governor of Georgia, sleeps with a young escort, Candy Cane (Tika Sumpter), on his 50th birthday. Later the same day, he meets his daughter Amanda's (Jaclyn Betham) new friend Candace Young...who turns out to be Candy. It gets better; Candace also happens to be the daughter of Hanna Young (Crystal Fox), the Cryers' new maid. Candace proceeds to make life hell for not only Jim, but many other characters, though that's not to say other characters aren't responsible for all the other drama that goes down.

WARNING: This page contains some unmarked spoilers for Seasons 1-2.

The Haves and the Have Nots contains examples of the following tropes: