While the costumes, sets and scenery of The Wild Wild West are as vibrant as a late 1960's viewer with a new, state-of-the-art television set could wish for, the most colorful thing about the show is, undoubtedly, its characters.

If you could seduce any woman, defeat any man (or a whole gang of them) in a fair fight and keep your cool no matter what elaborate Death Trap you found yourself in... you still wouldn't be a patch on James T. West. He not only does all of that, he does it effortlessly, shirtlessly and in pants a few sizes too small. He's equally at home whether he's taking on seven goons at once or snarking the Big Bad as he (or she) reveals the villainous plan of the week. Nigh-on indestructible, imperturbable and with a mind as quick as his flashing fists, it's no wonder that James West is regarded as the United States' best Secret Service agent.

Played by: Ross Martin
James: Artie, how do you plan to escape?
Artie: Oh, the usual. Guile. Cunning. Trickery.
—"The Night of the Arrow"

Indeed. Add a brilliant scientific mind and you have the primary tools of Artemus Gordon's trade. Though he can hold his own in a fight when necessary, he much prefers to use his wits to achieve his ends. As an actor turned Secret Service agent, he makes full use of his genius for languages, disguise, spell-binding oratory and scientific innovation. He's also fond of the finer things in life - art, wine, gourmet cuisine and, last but certainly not least, beautiful women. He's liable to turn up anywhere and as anyone... but always in the nick of time. 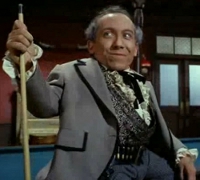 Though possessed of a towering intellect, Dr. Loveless can't reconcile himself to the small body in which he finds himself confined and, at some point, turned to evil. After repeated defeats by West and Gordon he develops a personal grudge against the pair, particularly West, though, at the same time, he learns great respect for their talent and resourcefulness. West himself admits at one point when Loveless has apparently died: "I'll miss him, that little man with the giant rage against the whole universe." 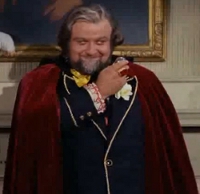 A man of mystery. It's never made clear what powers Manzeppi has, if any, but he is capable of seemingly inexplicable feats of "magic." He is suave, sophisticated, intelligent, cold-blooded and completely self-serving.