Series / Arang and the Magistrate 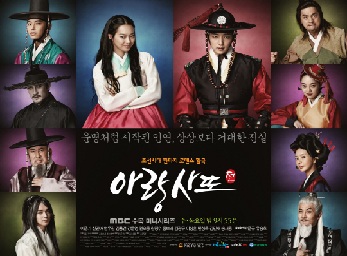 Arang and the Magistrate (아랑사또전, Arangsattojeon) is a 2012 fusion saeguk that aired on South Korea's MBC network.

Euh Oh is the son of a nobleman and a slave, with the ability to see and speak with ghosts, but prefers to ignore any and all people, corporeal or ghostly, in his quest to find his missing mother. He travels to the town of Miryang, following up on the last place she was rumored to be. On the way, he bumps into Arang, a feisty female ghost. They join forces to discover what happened to Arang during her human life, and discover that her life and the life of his mother are inextricably intertwined with the village, it's corrupt leader, and demonic machinations. He assumes the mantle of magistrate in order to facilitate his investigation, never realizing that the fate of the couple and the people they love are part of a game set up by King Yeomra and the Jade Emperor in Heaven.