The first beings created by God, the Leviathans were imprisoned in Purgatory when God became worried they would consume His other creations. In 2011, they were freed when Castiel opened Purgatory and absorbed all the souls there to become the new God. The Leviathans eventually took over Castiel, but when Castiel proved unable to contain them, they left the angel's body and escaped into the world, possessing many people. 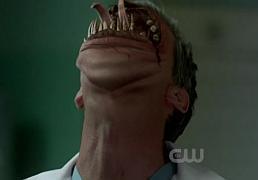