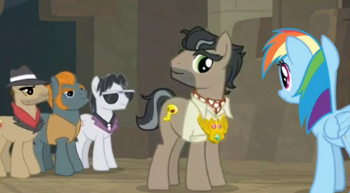 You should trust him. He's a doctor.
Written by Nicole Dubuc
Advertisement:

Rainbow Dash is eagerly waiting for Fluttershy so they can go off to an A.K. Yearling book signing. Fluttershy, who got into the Daring Do books thanks to Rainbow, is late as she is reading the latest title in the series, but one that Rainbow hasn't heard of. Taking a look, she finds it is an unauthorized version of Daring Do, written by a pony named Groom Q.Q. Martingale, that seems highly critical of what Daring Do has done.

With Fluttershy in tow, Rainbow goes to see A.K. at her book signing, but finds that the crowds there are trying to ask A.K. about Martingale's book, and walk off when she can't provide counter-answers. A.K. admits she has no idea who Martingale is or how he knows so much about her, but does know he is having his own book signing across the street. Rainbow and Fluttershy goes to the other store and see Martingale and the crowd gathered for him, who they immediately recognize through the disguise as Doctor Caballeron. Rainbow immediately accosts Caballeron, but he remains aloof to being discovered, and Rainbow storms off. Fluttershy however tries to learn more, and as the crowd dissipates, he explains he wants to set the record right about what happened on Daring's adventures, asserting that he and his goons were only trying to recover important artifacts but Daring stole them first for her own safekeeping, and that Daring continually destroys important archaeological sites in these ventures. As Fluttershy continues to be attentive, Caballeron coerces her to help them recover a special artifact before Daring Do can. Fluttershy agrees to join their expedition, shocking Rainbow.

Rainbow warns A.K., who guesses Caballeron needs a pegasus' help to recover a truth-telling amulet, and slipping into her Daring Do outfit, takes off with Rainbow to catch up. Meanwhile, Caballeron and his goons continue to fake their thanks and support for Fluttershy, but after she is able to provide them a fresh lunch and keep wild cats at bay, they start to realize she is particularly helpful. They reach and enter the temple with the amulet, with Daring and Rainbow right behind them.

In the temple's center, Fluttershy successfully retrieves the amulet, while Caballeron and his goons help her to escape from a dangerous eruption of lava. Daring and Rainbow arrive just as Fluttershy turns the amulet over to Caballeron, but this results in Caballeron revealing his whole plan. However, he and his goons admit that Fluttershy has convinced them there may be better ways to earn a living. Just then, the temple guard, Ahuizotl appears and traps them in the inner chamber, demanding they return the amulet. When the ponies don't, he sends a pack of stone gargoyles after them. Rainbow, Fluttershy, Daring, Caballeron and his goons work together to keep them at bay. However, Ahuizotl manages to get his hands on the amulet, but coerced by it, reveals that he needs to make sure this amulet doesn't get stolen, as his failure to stop both Daring and Caballeron from stealing other artifacts in the valley will get him in trouble with the other guardians. Fluttershy encourages everypony there to stop and listen to the others to work out a mutually beneficial solution. Daring and Caballeron agree, vouching on the amulet, that they will stop stealing artifacts, and this gives them both an idea.

Sometime later, A.K. Yearling and Martingale have co-authored a book together about Daring Do and Doctor Caballeron, but find that their work is being upstaged by Ahuizotl's own book about his own plights against the pair.