This is the page for characters in the Unicron Trilogy who were introduced in Transformers: Armada.

Spoilers are uncovered at your own risk. 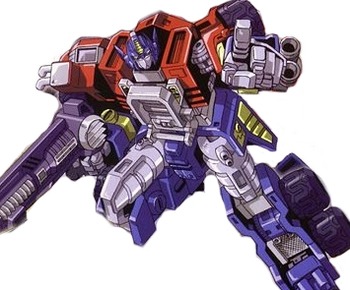 Prime, the Autobot commander of the forces on Earth, leads the team through the battles against Unicron (twice) and saves Cybertron and reality from Unicron. 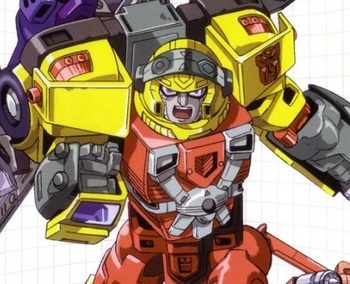 The resident team rookie, Hot Shot, has learned many hard lessons throughout his career, much to the chagrin of some of the older bots. 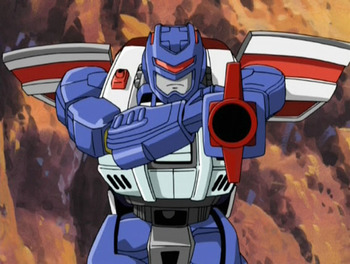 The Combat Medic of the Autobots may seem like the Non-Action Guy, but harm his friends, and you will regret it. 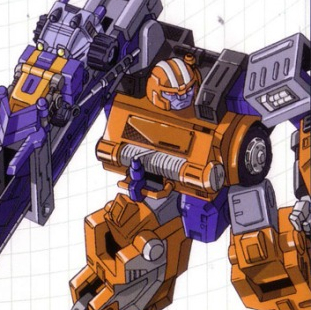 Smokescreen originally intended to be one of the team members who accompanied Optimus Prime to Earth. He entered the space bridge portal late, so he materialized sometime later than they did. He is later involved in a serious battle that leads to a significant Mid-Season Upgrade. 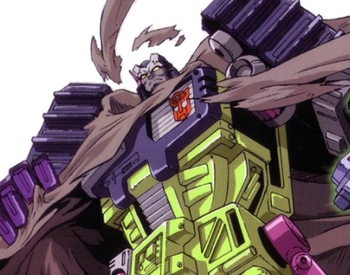 Scavenger is an old war veteran, who just so happens to be the Autobot who taught Optimus Prime everything he knows. 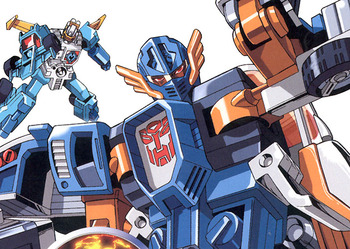 Cool and aloof, Blurr is one of the later additions to the Autobot ranks. He initially thought of the Mini-Cons as mere tools, a thought which Hot Shot slowly shot down.

He's the second-in-command of the Autobots on Cybertron. Jetfire left Cybertron and arrived on Earth to help Optimus and the others. 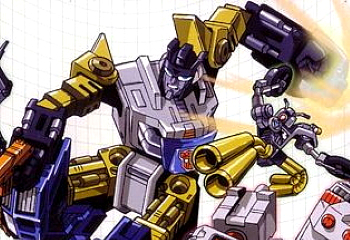 Hot Shot's newest partner. It didn't take long for Sideswipe to be captured by Hot Shot's friend-turned-foe, Wheeljack. Sideswipe was saved, but the experience taught him a harsh lesson about war, leading him to sober up quickly.

Hot Shot's former platoon commander, whose attitude during a particular battle had far more reaching consequences than he realized. 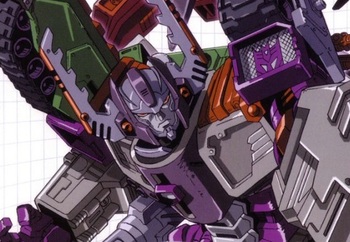 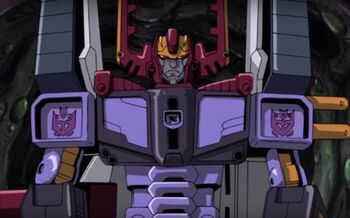 Leader of the Decepticons. Megatron is a malicious, all-powerful leader. He is a refined and focused general who treats his men with little care yet still infuses them with genuine respect for him and the Decepticon cause. 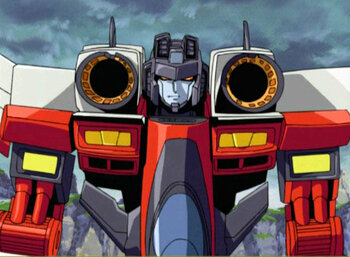 Megatron's poorly-treated second in command; he loathed Megatron because of the sheer mistreatment and contempt Megatron often piled onto him. Megatron always seemed to expect too much from him. 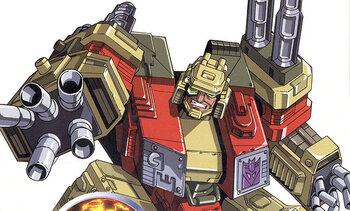 Demolishor is extremely strong and acts very seriously at all times. He is wholly devoted to Megatron and the Decepticon cause, unquestionably following orders at every turn. 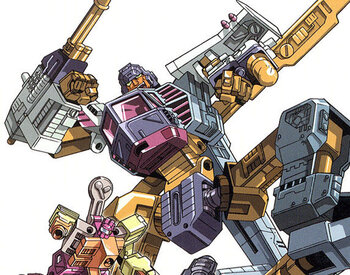 Cyclonus has a very "trigger-happy" personality, laughing and cackling as he fires his weapons almost entirely at random on the battlefield. 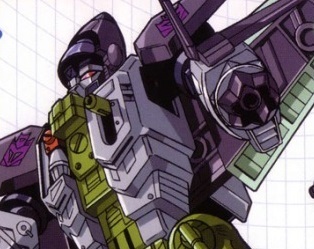 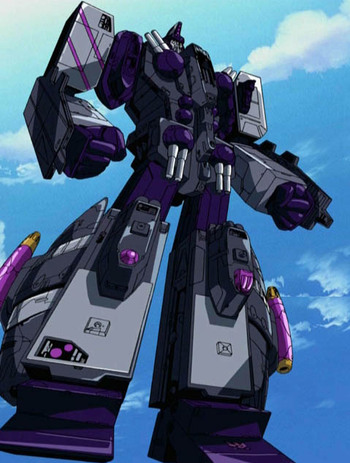 The largest of the Decepticons, the lumbering giant Tidal Wave, proved a mighty foe for the Autobots. 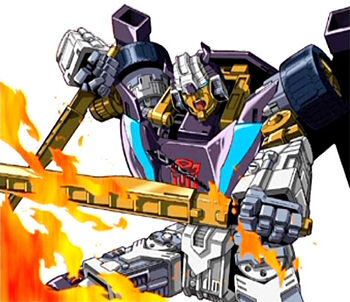 Wheeljack was formerly an Autobot serving under Hot Shot. When Wheeljack was pinned beneath some debris during a fire, Hot Shot was forced to leave him to get help, but his superiors prevented him from returning. Wheeljack believed that Hot Shot had abandoned him, and when Megatron found and rescued him, he swore loyalty to the Decepticon commander.

Rad is the one who reactivated the Mini-Con ship while exploring some caves and is inadvertently responsible for the Cybertronian War restarting.

Carlos is Rad's friend and was with him when he reactivated the Mini-Cons.

Alexis, along with Rad and Carlos, befriended the Street Action Team Mini-Cons and Autobots on Earth. She frequently helped them by teaching them the ways of Earth.

Billy and Fred start as bully classmates of Rad, Alexis, and Carlos but become their friends after the trio and the Autobots save them from the Decepticons.

Fred is a classmate of Rad, Alexis, and Carlos, who bullies them alongside Billy as his right-hand guy as Billy has the dominant personality. Fred eventually becomes friends with them and joins the Autobot team.

A primal force of evil, his origins lost to the mists of time. He is the embodiment of all darkness and hate that lurks in the hearts of all beings.

Voiced by: Takahiro Sakurai (Japanese) and Paul Dobson (English; in Armada), Susumu Chiba (Japanese) and Ted Cole (English; in Cybertron)
Sideways, an intergalactic drifter transforms into a motorcycle. His consciousness is seemingly housed within the smaller robot head that rides his alternate mode, capable of splitting into two components. A two-timing Transformer whose allegiance follows his own agency or whims at the time and eventually fell into the servitude of a dark menace. By Cybertron, he is back in action and traded the heads for a faction symbol that switches on the cuff.