Characters that appeared in Tite Kubo's Bleach. This page is for the Fullbringers, who possess the soul-manipulating power called "Fullbring" and generally belong to a mysterious organization known as Xcution. Their stated goal is to remove their Hollow-derived powers and go back to being normal humans. 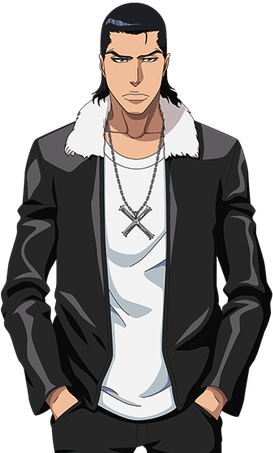 "Time will constantly try to catch up with you. And with a roar, it will overcome you. Do not look ahead. Hope only lies within the unforeseeable current that will close in from behind."
Species: Human (Fullbringer); Soul
Zanpakuto: Unknown
Fullbring: Cross of Scaffold
Voiced by: Hiroki Tochi (JP), Travis Willingham (EN)
A mysterious and manipulative individual, Ginjo is the apparent leader of Xcution, although he doesn't seem to care too much for it, or acknowledge any real hierarchy within the organization. He approached Ichigo, tempting him with bogus investigative questioning regarding his father, to arouse his interest concerning Xcution.

His Fullbring, Cross of Scaffold, allows him to transform his cross pendant into an enormous claymore that can use an explosive energy attack.

"How pitiful... Are you so overcome with rage that words won't come out?"
Species: Human (Fullbringer) / Soul
Fullbring: Book of the End
Voiced by: Voiced by: Daisuke Ono (JP), Matthew Mercer (EN)
The founder of Xcution, he successfully transferred several Fullbringers' powers to a Substitute Soul Reaper, but killed everyone directly involved afterward and disappeared. He reappears in the present as the apparent main antagonist, causing Ginjo to take Ichigo under his wing and help him unlock his Fullbring powers. He is cruel, manipulative and possesses a power to either cut through anything or alter the memories of others.

His Fullbring, Book of the End, is a katana capable of cutting anything, but its true power is altering the past of anything Tsukishima cuts.

"Hide away all the things you want from everybody else and they become yours."
Species: Human (Fullbringer)
Fullbring: Dollhouse
Voiced by: Voiced by: Megumi Toyoguchi (JP), Cristina Valenzuela (EN)
An overconfident and vain young girl, she immediately thinks Ichigo is hot the moment she meets him - not that she'll admit it to him. She mainly assists him in his new Training from Hell.

Her Fullbring Dollhouse allows her to basically be a Reality Warper to anything or anyone she finds cute, permitting said things or people with heart-shaped "passes." This includes shrinking people down to the size of an action figure and "permitting" them into her cardboard dollhouse.

"I've never formed a real connection with anyone, Fullbring or no Fullbring."
Species: Human (Fullbringer)
Fullbring: Invaders Must Die
Voiced by: Mitsuhiro Ichiki (JP), Lucien Dodge (EN)
The youngest member of Xcution, just behind Riruka. Yukio is calm and quiet, usually not speaking unless something catches his attention. He seems fond of playing video games. He is slightly annoyed whenever Riruka kicks open a door, as he can see up her skirt whenever she does so.

His Fullbring, Invaders Must Die, is channeled through his portable game console and allows him to imprison targets within a video game whose parameters (such as the gameplay system) and "characters" (his prisoners) are under his full control. It will only function as long as the battery is charged, however - unless it's plugged into a power-source. 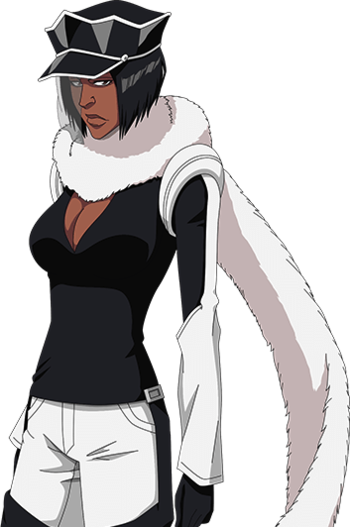 "At some point I must have realised that these Fullbrings we bear are all that really holds us together."
Species: Human (Fullbringer)
Fullbring: Dirty Boots
Voiced by: Atsuko Yuya (JP), Julie Ann Taylor (EN)
A member of Xcution. Jackie is a tall woman with short dark hair. She wears a dark long-sleeved shirt with tight fitting trousers.

Her Fullbring, Dirty Boots, increases her physical combat strength as her clothes are dirtied.

"The key truly does lie in having the correct timing."
Species: Human / Soul
Fullbring: Time Tells No Lies
Voiced by: Atsushi Ono (JP), Michael Sorich (EN)
The eldest member of Xcution, and their apparent bartender at their base of operations. He is a very to-the-point person, and has a rather cruel way of training Ichigo in the use of his Fullbring.

Kutsuzawa's Fullbring, Time Tells No Lies, allows him to place "timers" and restrictions on basically anything based on conditions of his choosing. If these conditions aren't met, the target is purged by the flames of time.

Yasutora "Chad" Sado
Between the Time Skip after Aizen's defeat, Sado joined Xcution after learning that his power is a Fullbring. He convinces Ichigo to join Xcution as well, not knowing that Xcution wants to steal his friend's power. After the defeat of Xcution, Sado leaves the group. For details, see here.
Ichigo Kurosaki
Ichigo joins Xcution after Ginjo's persistantly asked to so, not knowing that Xcution's goal is to steal his Fullbring's power. Xcution help Ichigo to develop his Fullbring while Tsukishima brainwashes Ichigo's family and friends to his side. After Ginjo has stolen Ichigo's power, Ichigo becomes Xcution's enemy and defeats with the help of the Gotei 13. For details, see here. 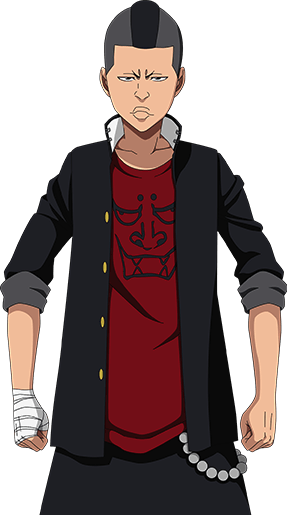 "I'm gonna show you how man I am by pounding your face into the ground!!"
Species: Human (Fullbringer)
Fullbring: Jackpot Knuckle
Voiced by: Hiroyuki Yoshino (JP), Todd Haberkorn (EN)
From Miyashita Commercial High School, Shishigawara is the hot-blooded minion who devotes himself to Tsukishima. He is largely incompetent at everything he does, but underneath his recklessness lies a powerful Fullbringer not to be underestimated.

His Fullbring, Jackpot Knuckle, takes the form of a knuckleduster with three slot machine icons. Depending on how lucky Shishigawara's roll is, the opponent will experience equal misfortune. Upon contact, the numbers roll, and if he hits a jackpot, Shishigawara can manipulate a probability related to whatever he punches; for example, he causes a piece of the hilt of Ginjo's sword to break off due to "simple wear and tear", or "just happens" to completely dislocate Ikkaku's shoulder with a single hit.