Characters that appeared in Tite Kubo's Bleach. This page deals with Aizen and his direct lieutenants.

This page contains massive spoilers, not all of which are marked. Tread carefully. 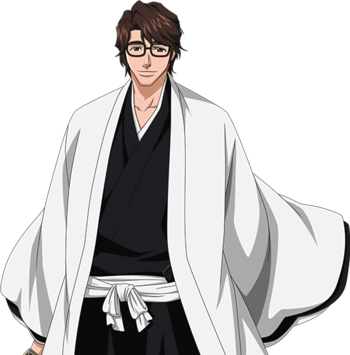 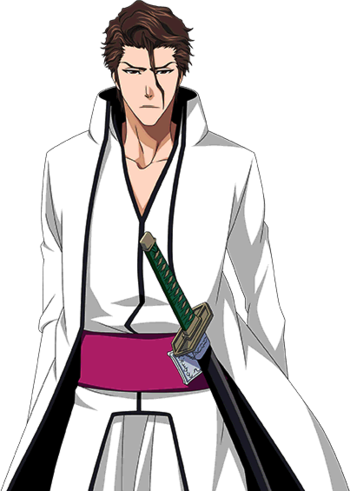 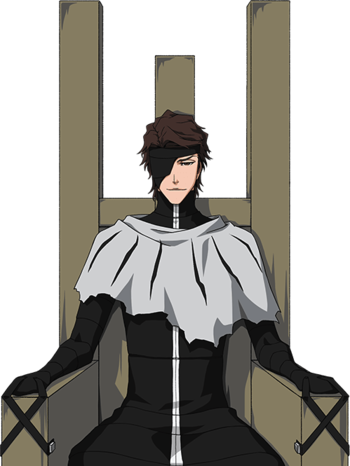 "No one stands on the top of the world. Not you, not me, not even gods, but the unbearable vacancy of the throne in the sky is over. From now on, I will stand atop Heaven."

Species: Soul Reaper
Zanpakuto: Kyoka Suigetsu (Shikai)
Voiced by: Show Hayami (JP), Kyle Hebert (US), Ricardo Mendoza (Latin American Spanish)
At first, Aizen presented himself as the affable and gentle Captain of the 5th squad. During the Soul Society arc, he faked being murdered for investigating the Government Conspiracy behind Rukia Kuchiki's unusually harsh treatment by Central 46 following her arrest. In truth, he masterminded said conspiracy in an elaborate gambit to acquire the Hogyoku which opposing Chessmaster Urahara Kisuke had hidden in Rukia's gigai in an equally elaborate bid to destroy it.

After revealing himself and retreating from Soul Society, he takes up residence in the world of Hollows, Hueco Mundo, and uses the aforementioned MacGuffin to create the Arrancar army in hopes of eventually finding the King's Key and becoming 'the one to stand atop heavens'. He is noted for his extraordinarily powerful abilities, Kick the Dog tendencies, elaborate schemes, and mysterious aura.

His Zanpakuto, Kyoka Suigetsu, lets him manipulate his opponents with near-perfect illusions. As he fuses with the Hogyoku, he progressively transforms into monster-like forms, which grant him absurd levels of power. 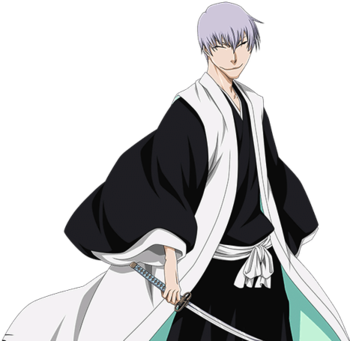 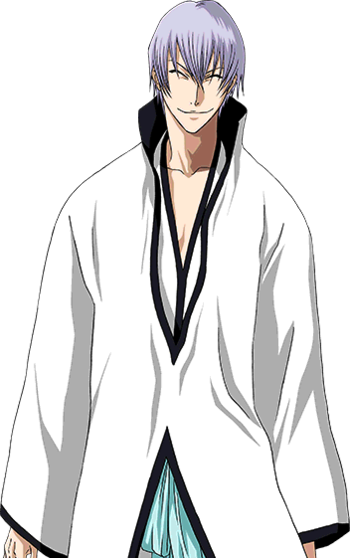 "Would you like me to save you?... Just kidding."
Species: Soul Reaper
Zanpakuto: Shinso (Shikai) / Kamishini no Yari (Bankai)
Voiced by: Koji Yusa (JP), Doug Erholtz (US), Carlos del Campo (Latin American Spanish)
Gin is the former Captain of the 3rd squad, whose face is forever fixed in Eyes Always Shut and a foxy smile to go along with it. He was also involved in the past with Rangiku, the only person to whom he has shown something resembling more-or-less genuine kindness. Though suspected to be the Big Bad of the Soul Society arc, he turned out to only be Aizen's subordinate and followed him to Hueco Mundo. Gin largely operates as Aizen's Dragon, though his motivations are quite ambiguous.

His Zanpakuto is Shinso, which has the ability to instantly turn to dust, expand, then reform, giving the illusion that the blade simply extends lightning-fast. His Bankai Kamishini no Yari upgrades his basic Shikai abilities to almost unfathomable speeds and distances, along with the ability to poison enemies with the dust produced by the blade. 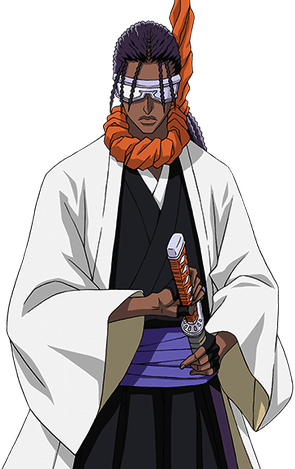 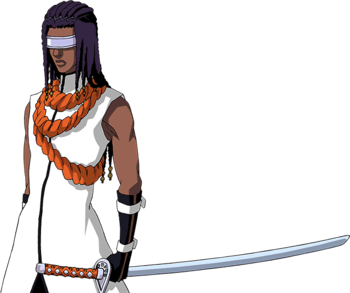 "My eyes can only see one path and that is the path with the least amount of bloodshed. Justice, is always there, and the path I follow, is justice."
Species: Soul Reaper-Hollow hybrid
Zanpakuto: Suzumushi (Shikai) / Suzumushi Tsuishiki: Enma Korogi (Bankai) / Suzumushi Hyakushiki: Grillar Grillo (Resurreccion)
Voiced by: Toshiyuki Morikawa (JP), David Rasner (ENG, Episodes 24-219), Brian Palermo (ENG, Episodes 277+), Irwin Daayán (Latin American Spanish)
Kaname Tōsen is the former Captain of the 9th squad. He's a dark-skinned blind man driven to join the Soul Society to enforce justice and follow the path of least bloodshed, inspired by the tragic death of his old friend who was murdered by her husband. He forms a good friendship with Captain Komamura, but he was goaded by Aizen to join his schemes due to being impressed with his ideals. Upon defection, multiple characters call him out on starting a bloody war despite his claimed ideals.

His Zanpakuto is Suzumushi, capable of making his opponents black out with a supersonic frequency or creating echoes of his blade to launch as projectiles. His Bankai, Suzumushi Tsuishiki: Enma Kōrogi, negates the senses as the environment is enveloped in a black sphere. He is also capable of using an Arrancar's Resurrección, named Suzumushi Hyakushiki: Grillar Grillo, which transforms him into a horrendous cricket-like monster capable of firing Ceros and using sound-based attacks.