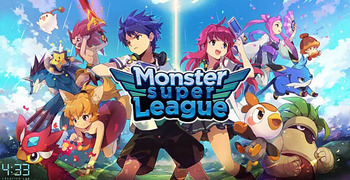 Monster Super League is an RPG Mon game developed by 4:33. It is available for iOS and Android mobile phones.
Advertisement:

The protagonist is a human who gets transported to Latecia from their homeworld. There, they meet Seira, who informs them that they were chosen by one of two goddesses to protect Latecia from Servants of Chaos, who intend to spread chaos throughout Latecia. As you progress through the story, you encounter one particular Servant of Chaos - a girl in a dark-colored dress - who tries to further progress toward the collective goal of her allies, as well as Kaz who, despite helping the protagonist at certain points in the story, leaves them and Seira wondering whose side he's really on.