Characters that appeared in Tite Kubo's Bleach. This page deals with the Hollows, corrupted spirits that have transformed into monstrous creatures.

NOTE: To avoid confusion to English-language readers, who may be more familiar with the English anime than the manga, all names are in Western order. 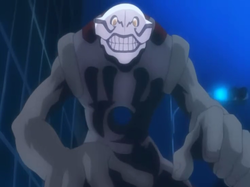 Species: Hollow
Voiced by: Yutaka Aoyama (JP), Michael Sorich (EN)
A humanoid fish-headed Hollow who Rukia was tasked with slaying. He attacked the Kurosaki household, badly injured Rukia, and was slain by Ichigo. His appearance was later revealed to have been orchestrated by Aizen in order to facilitate Ichigo awakening his Soul Reaper powers.
Hexapodus 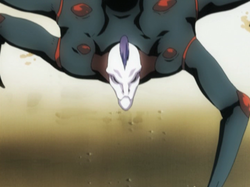 Species: Hollow
Voiced by: Takehito Koyasu (JP), Grant George (EN),
A weak spider-like Hollow that Rukia located hunting the ghost of a young boy. He was slain by Ichigo after a short fight.
Acidwire 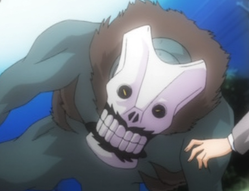 Species: Hollow / Sinner
Voiced by: Hisao Egawa (JP), JB Blanc (EN), Miguel Ángel Ghigliazza (Latin-American Spanish)
A male bat-like Hollow that targeted Chad. He was a serial killer in life, and was dragged off to Hell after Ichigo cut his mask. He returned in a filler episode as a Sinner, attacking Rukia and Renji before being forced to return to Hell.
Grand Fisher 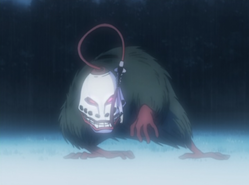 Species: Plus / Hollow
Voiced by: Susumu Chiba (JP), Wally Wingert (EN), Ulises Maynardo Zavala (Latin-American Spanish)
The ghost of a greedy man who wanted to inherit his father's hospital, now long-abandoned and dilapidated. He was the subject of Don Kanoji's "Ghost Bust" TV show, but the oblivious paranormal investigator caused him to Hollowfy by breaking his Chain of Fate. He was cleansed by Ichigo, turning back into a Plus before moving on to Soul Society.
Numb Chandelier 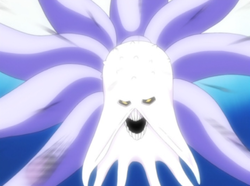 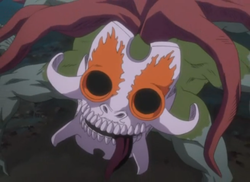 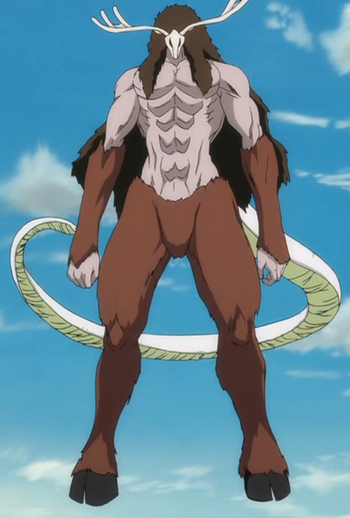 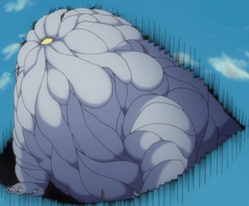 Species: Hollow
A massive Hollow capable of spawning Gillians. It is treated as a pet by Wonderweiss, who is devastated when it is killed.