Characters that appeared in Tite Kubo's Bleach. This page deals with exiled Soul Reapers, and Visoreds. Their origins are explained in the mini arc "Turn Back The Pendulum" apart from Isshin Kurosaki, whose origins remained unrevealed until the "Everything but the Rain" mini arc. 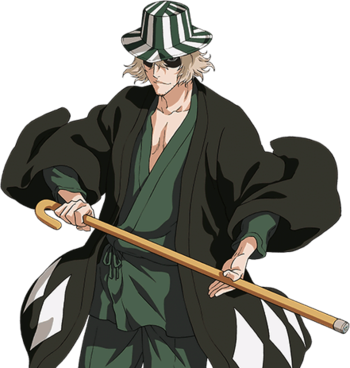 "You're making too much of me. All I am these days is the poor owner of a small time candy store."
Species: Soul Reaper
Zanpakuto: Benihime (Shikai) / Kannon Biraki Benihime Atarame (Bankai)
Voiced by: Shin-ichiro Miki (JP), Michael Lindsay (US, Episodes 1-231), darrin'd by Doug Erholtz (US, Episodes 231 onwards, live-action movie), Manuel Campuzano (Latin America)
Played by: Seiichi Tanabe (live-action movie)
Ichigo's mentor, at first. Known for usually wearing sandals and hats (so he's called Geta-Boshi or Hat & Clogs), and runs a very weird store. His personality may be a bit eccentric and playful, but he's the real deal. Urahara is later revealed as the former President of the Soul Society Research & Technology Center as well as a Gotei 13 Captain.

His Zanpakuto is Benihime, a hidden-cane-sword that can create blood-based structures and launch energy blasts. His Bankai is Kannon Biraki Benihime Atarame, which summons a giant princess capable of 'restructuring' anything within its range. This allows both healing and remodelling limbs to optimise strength at the same time. It can also tear the flesh off of any foes foolish enough to get close to it. 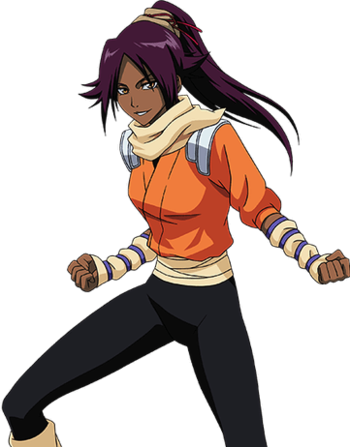 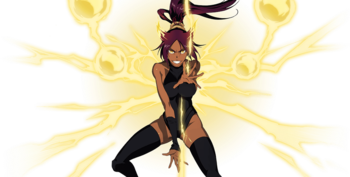 "Heart and Soul are connected, what is important is where is the heart."
Species: Soul Reaper
Zanpakuto: Unknown
Voiced by: Satsuki Yukino (JP), Shiro Saito (as a cat) JP, Wendee Lee (US), Terrence Stone (as a cat) (US), Rebeca Gómez (Latin America), Pedro D'Aguillon Jr. (as a cat) (Latin America)
One of the most beloved female characters in Bleach. Yoruichi is the dark-skinned Soul Reaper who acts as a mentor/guide or sorts for Ichigo and friends in Soul Society and later revealed as one of the more powerful Soul Reapers. She was once a member of the Shihouin noble family, and mentored both Byakuya and Sui-Feng. She has the ability to turn herself into a black cat, complete with masculine voice. Also, later chapters reveal her to be the former Captain of the 2nd squad of Gotei 13, preceding Sui-Feng. Her ultimate form is Shunkō: Raiju Senkei: Shunryū Kokubyō Senkei, which turns her into a human-cat-thunder goddess hybrid, granting her tremendous speed and strength at the (temporary) cost of her human intelligence and forcing her to behave like a cat.
Tessai Tsukabishi

Species: Soul Reaper
Zanpakuto: N/A
Voiced by: Kiyoyuki Yanada (JP), Michael Sorich (US), Martín Soto (Latin America)
General assistant to Urahara around the store who has to occasionally strong arm his boss into looking after himself.

As the former captain of the Kido Corps, he is extremely adept at casting Kidou spells, even forbidden ones. 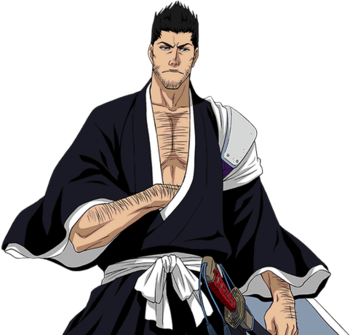 "Silence! No matter what reason, to he who disrupts this household’s iron harmony, only a punishment of blood can be rendered!"
Species: Soul Reaper
Zanpakuto: Engetsu (Shikai)
Voiced by: Toshiyuki Morikawa (JP), Patrick Seitz (EN, anime), Keith Silverstein (EN, live-action movie) Roberto Mendiola (Latin America)
Played by: Yosuke Eguchu (live-action movie)
A doctor at a small clinic and the father of Ichigo, Yuzu and Karin. Despite his questionable parenting techniques and an extremely convincing portrayal of coming across as a complete moron, he is in fact a Soul Reaper and the former Captain of Squad 10, as well as the former head of the Noble House Shiba.

His Zanpakuto is Engetsu, which shares some abilities with his son's sword Zangetsu - namely the signature technique Getsuga Tenshou. 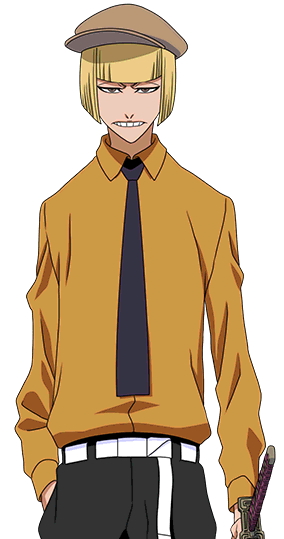 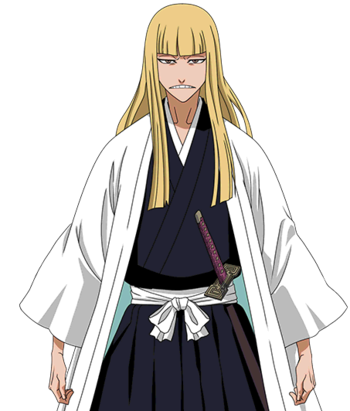 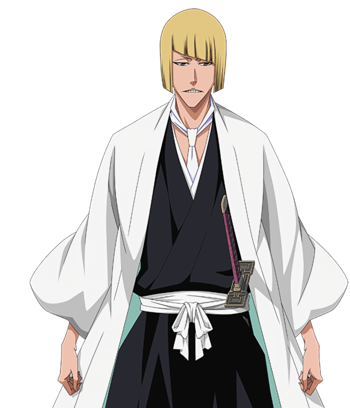 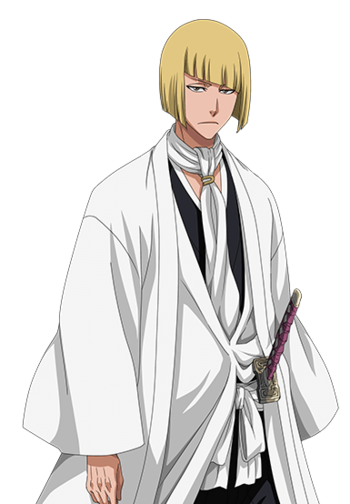 "I swear. I really don't like gettin' involved in Soul Reaper fights. Oh well. When you hear the sound of fighting so close by you can't just ignore it."
Species: Soul Reaper-Hollow hybrid
Zanpakuto: Sakanade (Shikai), Sakashima Yokoshima Happo Fusagari (Bankai)
Voiced by: Masaya Onosaka (JP), Roger Craig Smith (US), Arturo Cataño and Carlo Vásquez (Latin-American Spanish)
The unofficial leader of the Visoreds, he was the one that tried to recruit Ichigo into their little band. He was the former captain of the 5th Division, with Aizen as his lieutenant, prior to his Hollowfication. He is goofy, carefree and tends to get abused by Hiyori, but he is in fact an extremely effective combatant.

His zanpakuto is Sakanade, an unusually-shaped sword that releases a sweet mist when called upon. Any foes who catch onto the scent have all of their senses flipped and inverted. Sakanade's Bankai is named Sakashima Yokoshima Happō Fusagari ('Reversed Evil Eight-Treasure Barrier'), and it takes the appearance of a platform possessing flame-shaped extensions, with Shinji standing in the center. It also reverses the blade and the ring's appearance on the weapon. Its abilities are an extension of the perception-altering abilities of Sakanade's shikai; however, instead of changing the perception of the senses themselves, it alters mental perception. Chiefly, it causes the perception between ally and enemy to be reversed, causing former allies to become hostile to one another. 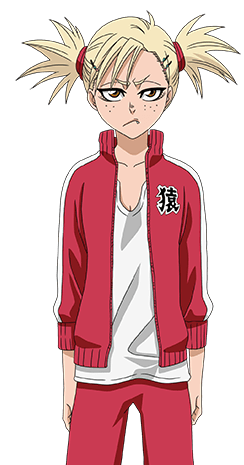 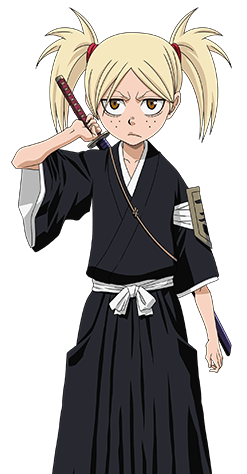 "I really, really hate humans. I really hate Soul Reapers too."
Species: Soul Reaper-Hollow hybrid
Zanpakuto: Kubikiri Orochi (Shikai)
Voiced by: Reiko Takagi (JP), Lara Cody (US, Episodes 110-130), Laura Bailey (US, Episodes 206 onward), Betzabé Jara (Latin-American Spanish)
Highly short-tempered, irritable and tomboyish, she's arguably the closest to Shinji out of all the other Visoreds. Once attempted to kill Orihime and Chad to keep them from learning of hers and Shinji's identities. She was once the lieutenant of the 12th division under Urahara, whom she absolutely loathed at first due to replacing her mother figure.

Her Zanpakuto is Kubikiri Orochi, an enormous cleaver. 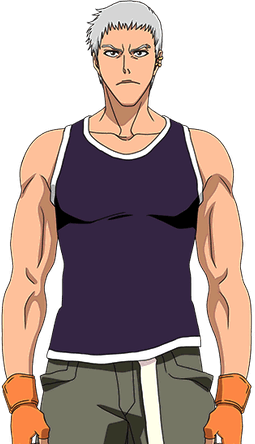 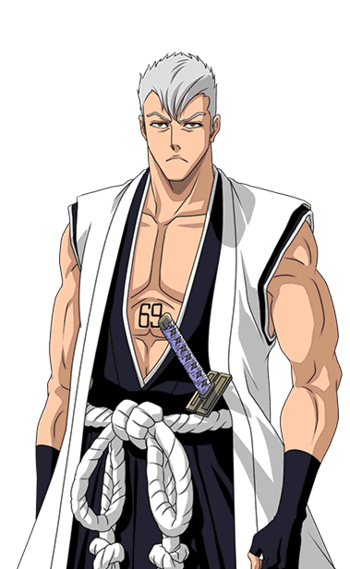 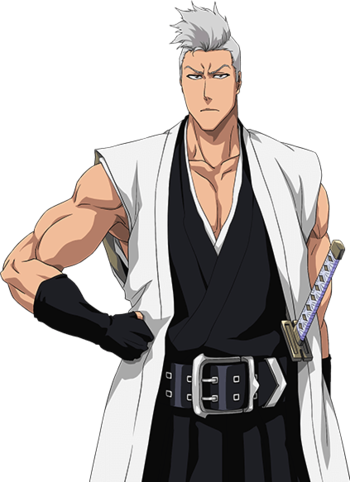 "You're alive, be happy! SMILE!"
Species: Soul Reaper-Hollow hybrid
Zanpakuto: Tachikaze (Shikai) / Tekken Tachikaze (Bankai)
Voiced by: Tomokazu Sugita (JP), Dave Mallow (US), Carlos Íñigo (Latin-American Spanish)
A more serious and decisive member of the Visored, though is easily annoyed and temperamental. He was once the captain of the 9th Division with both Mashiro and Tousen under his wing. In addition, he's the first one to be Hollowfied, which technically makes him the oldest Visored. He saved a much younger Shuhei Hisagi from a Hollow, who became a Soul Reaper to try and be like him.

His Zanpakuto is Tachikaze, a trench combat knife that can launch wind-based attacks. His Bankai is Tekken Tachikaze, a pair of armored spiked knuckles which can remodel themselves, and are perpetually emitting shockwaves. 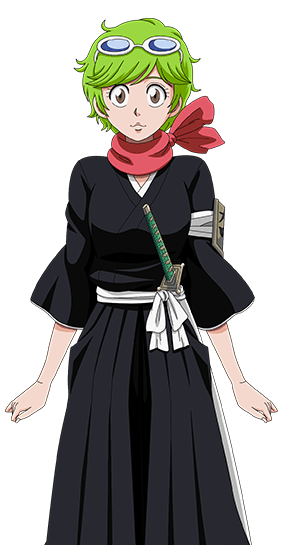 "How dare you. You ripped my scarf. I'll never forgive you."
Species: Soul Reaper-Hollow hybrid
Zanpakuto: N/A
Voiced by: Akemi Kanda (JP), Laura Bailey (US), María Fernanda Morales (Latin-American Spanish)
A youthful Visored noted for her rather childish behaviour at most points. She was Kensei's lieutenant, and the second to be Hollowfied. Unlike the others she doesn't wield a zanpakuto, relying primarily on her powerful kicks. She can hold her Hollow form much longer than the rest of the group.
Rojuro "Rose" Otoribashi 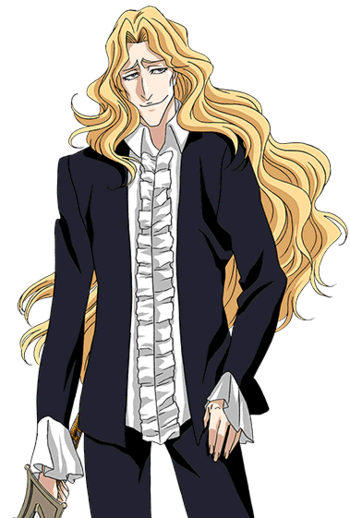 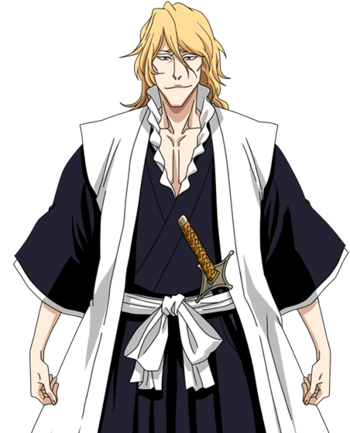 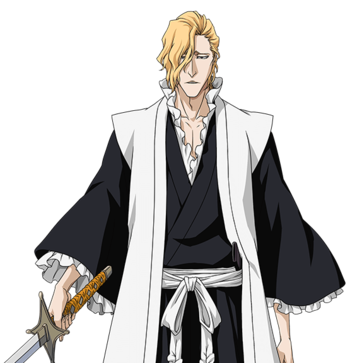 "What sort of guitar could fail to cry when faced with the deaths of so many? My guitar is already weeping."
Species: Soul Reaper-Hollow hybrid
Zanpakuto: Kinshara (Shikai) / Kinshara Butodan (Bankai)
Voiced by: Shouto Kashi (JP), Christopher Corey Smith (EN), Moisés Palacios (Latin-American Spanish)
A comparatively calm, easy-going Visored, with a seemingly disinterested flair and a thing for music. Former captain of the 3rd Division.

His Zanpakuto is Kinshara a sound-based whip capable of enveloping his opponents in powerful explosions. His bankai is Kinshara Butōdan, which uses music to create illusions to harm the enemy. 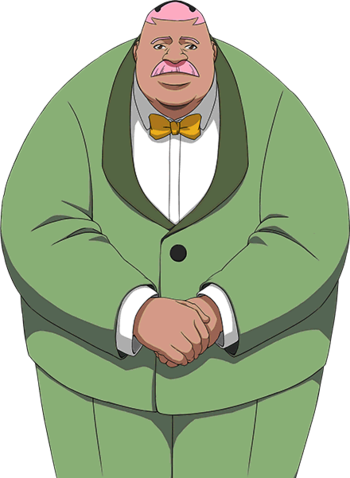 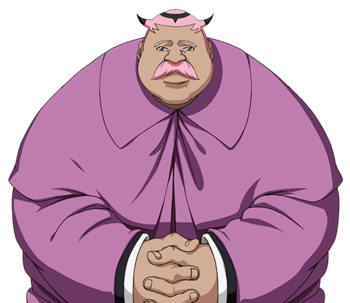 "In Soul Society, there is no being with 'God' in its name other than the Soul Reapernote The Japanese term Shinigami literally means Death God. That is why we cannot understand the significance of your words... Please forgive our impiety, oh God of Hueco Mundo."
Species: Soul Reaper-Hollow hybrid
Zanpakuto: N/A
Voiced by: Takashi Nagasako (JP), Joe Ochman (US), Guillermo Rojas (Latin-American Spanish)
The largest and friendliest of the Visoreds, quite kind-hearted and subservient to the more authoritative members. He was the lieutenant of the Kido corps, under Tessai's wing. Despite his gentle appearance and demeanor, he is an exceptionally capable and powerful combatant, more than able to hold his own without a Zanpakuto.
Lisa Yadomaru 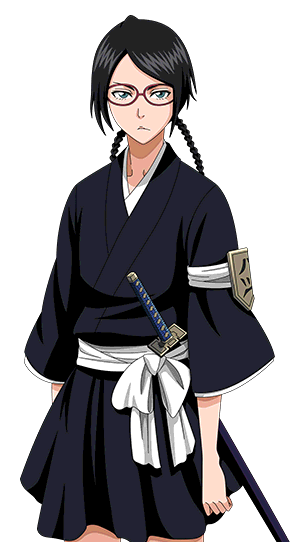 "The enemy of my enemy is my friend! That should be a good enough reason to fight together."
Species: Soul Reaper-Hollow hybrid
Zanpakuto: Haguro Tonbo (Shikai)
Voiced by: Kanako Hatori (JP), Tara Platt (US), Angélica Villa (Latin-American Spanish)
The calmest of the female Visoreds, a bit secretive, aloof and detached, but around as irritable and tomboyish as Hiyori from above. Was the ex-lieutenant of the 8th Division. She seemed to be very caring for Nanao when she was just a child.

Her zanpakuto is Haguro Tonbo, a lengthy Shaolin spade. 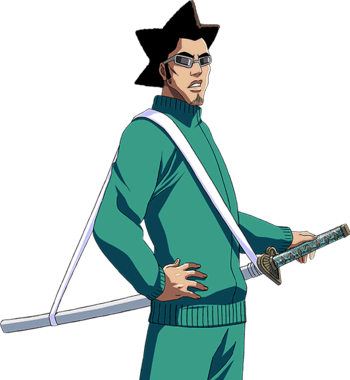 "There isn't anyone that doesn't feel something when their buddy goes down. If they get demoralized, then you exploit that. If they get enraged then you beat them before they can go crazy. Either way... victory comes to those that strike first!"
Species: Soul Reaper-Hollow hybrid
Zanpakuto: Tengumaru (Shikai)
Voiced by: Tetsu Inada (JP), Travis Willingham (US), Ricardo Méndez (Latin-American Spanish)
A laid-back, easy-going manga reader, somewhat carefree with a slight tough-guy feel. Was the ex-captain of the 7th Division.

His zanpakuto is Tengumaru, a gargantuan spiked club capable of dealing fire-based attacks.