Characters that appeared in Tite Kubo's Bleach. This page is for Ichigo's True Companions.

Note: To avoid confusion to people more familiar with the English-language releases, all names are in Western order. 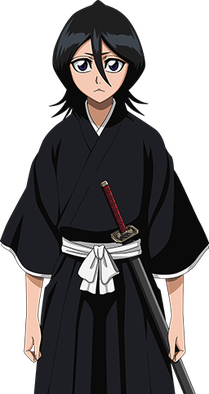 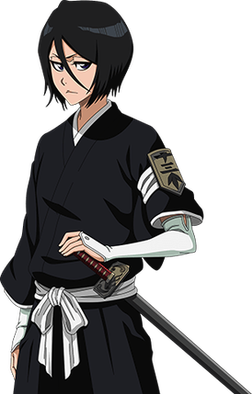 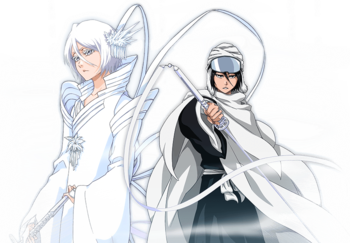 "In battles, the ones who get in the way are not the ones that have no power. They are the ones that have no resolve for battle."
Species: Soul Reaper
Zanpakuto: Sode no Shirayuki (Shikai) / Hakka no Togame (Bankai)
Voiced by: Fumiko Orikasa (JP), Michelle Ruff (EN, Anime), Cassandra Lee Morris (EN, live-action movie) Liliana Barba (Latin America), Azul Valadez (Latin America/live-action film), Belén Roca (Spain)
Played by: Miki Sato (Rock Musical Bleach), Hana Sugisaku (live-action movie)
Rukia's encounter with Ichigo in his bedroom while Hollow-hunting is the trigger for the story. Upon losing the fight with the Hollow, she transfers her power to Ichigo to save his family. She forces him to act as a Soul Reaper in her stead until she is hauled back to Soul Society for illegally empowering Ichigo.

Sarcastic, aggressive, and convinced of her own artistic merit, Rukia is proficient at kidou and a powerful fighter. Far too talented for her low military rank, she's eventually promoted to 13th Division lieutenant. Her snow-white zanpakuto, Sode no Shirayuki, is the most beautiful in the whole of Soul Society. It lowers the temperature of her body at will, even to absolute zero, allowing her to freeze everything she touches or fight with waves and pillars of ice. Her Bankai, Hakka no Togame, turns her to solid ice and unleashes a powerful, blinding white explosion that instantly freezes everything within the blast radius.

Rukia plays a special role in the third Bleach movie, Bleach Fade To Black, in which she is rendered amnesic by the antagonists and gains a Hollowfied form called Dark Rukia. 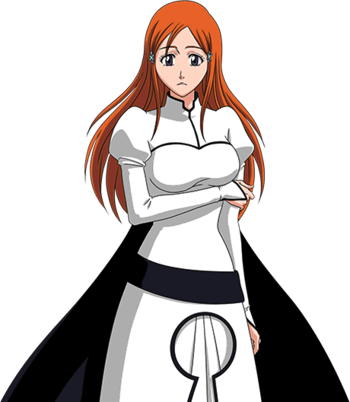 "There are so many things I wanted to do with my life! I wanted to become a teacher! I wanted to become an astronaut! I wanted to own my own bakery, and I wanted to go into Mr. Doughnut's and say, "I'll have them all!" And I wanted to go into Thirty-One and say "I'll have them all!" Ohhhh... I wish I could live life five times over. Then I'd be born in five different cities, I'd stuff myself full with different delicious things five times each, and I'd have five different jobs.... And then for those five times... I'd still fall in love with the same person... Thank you, Kurosaki-kun.... Goodbye."
Species: Human
Fullbring: Shun Shun Rikka
Voiced by: Yuki Matsuoka (JP), Stephanie Sheh (EN), Claudia Mota (Latin America), Nuria Trifol (Spain)
Played by: Erina Mano (live-action movie)
A classmate of Ichigo's, Orihime is introduced as having a crush on him because she finds his tough guy image comedic. One of Ichigo's earliest Soul Reaper acts is saving Orhime from her Hollowfied brother. Although Rukia tries to wipe the event from her memory, she secretly remembers it and develops spiritual awareness. When Rukia is forced to return to Soul Society, Orihime encourages Ichigo to go after her and then helps him rescue her. Bubbly, cheerful and scatterbrained, she is both a top academic achiever and talented martial artist, and later her more complicated psyche is revealed little by little.

During the Hollow attack instigated by Uryuu, she develops an unusual and unclassifiable ability called Shun Shun Rikka: by manifesting six spiritual beings, she can create barriers that perform different tasks, including shielding, undoing injuries and cutting things in half. This last ability requires Killing Intent which she struggles to harness until late in the end, whereas her healing and shielding are almost unparalleled. This power was eventually revealed to be awakened by the Hōgyoku influence. 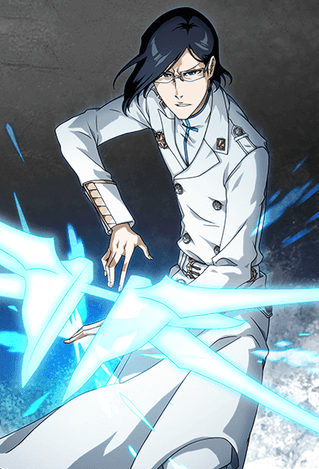 "I am calm. That's why I can fight you!"
Species: Quincy
Weapon: Kojaku / Ginrei Kojaku (Bow)
Vollstandig: Unknown
Schrift: A - The Antithesis
Voiced by: Noriaki Sugiyama (JP), Derek Stephen Prince (EN), Víctor Ugarte (Latin America), Óscar Muñoz (Spain)
Played by: Ryo Yoshizawa (live-action movie)
Uryuu is a Quincy whose initial conflict with the Soul Reapers stems from being forced to watched his grandfather Souken die in battle because the Soul Reapers arrived too late to save him. Souken taught him to never hate and to understand the Soul Reapers were correct to be concerned about the Quincy power to destroy souls, which threatens the balance of worlds. However, Uryuu's anger over Souken's death drives him to pick a fight with his classmate Ichigo when he realises that Ichigo has obtained Soul Reaper powers. This triggers the first major plot arc of the story.

Stoic and analytical, Uryuu is a nicer person than he likes to admit. He has a natural flair for sewing, but his fashion sense appeals more to women than to men. His vitriolic friendship with Ichigo amuses their mutual friends because of how similar the pair really are. He is the only main character that specialises in long-ranged combat, but he can fight close-quarters when forced to and displays a level of versatility that is not found within the rest of his group.

His Quincy cross manifests a bow called Ginrei Kokaju. After he drinks the blood of Yhwach, he gains the Schrift A - "The Antithesis." The Antithesis allows him to switch anything that has happened between two designated targets; for example, if he was grievously wounded in battle, at any time he can transfer those wounds to his enemy while simultaneously taking on their condition beforehand for himself, essentially healing himself. The ability can be activated at will with no necessary medium.

"I don't believe that an absolute power really exists in any world. Power is unstable. It changes constantly. Small differences will always appear, as one has between you and I. So the one who widens that gap will be the winner!"
Species: Human (Fullbringer)
Fullbring: Brazo Derecha de Gigante & Brazo Izquierda del Diablo
Voiced by: Hiroki Yasumoto (JP), Marc Worden (En, Episodes 2-85), Jamieson Price (EN, Episodes 86 onwards), Kaiji Tang (EN, live-action movie), Diego Armando Nieves (Latin America), Oriol Rafel (Spain)
Played by: Yu Koyanagi (live-action movie)
A huge, quiet man, Chad is Ichigo's oldest friend. As a young child, he was a bully until his grandfather taught him to raise his fist only to protect instead of hurt. Chad therefore vowed to his grandfather that he'd never fight for selfish reasons, not even to protect himself from bullies. His friendship with Ichigo began when Ichigo intervened to protect him from bullies and offered Chad a deal: Ichigo would protect Chad if Chad protected him. Chad has protected Ichigo's back ever since.

Chad began to develop spiritual awareness while helping Rukia fight Shrieker, a Hollow that had killed a young boy whose spirit Chad was trying to help. This didn't properly manifest into usable power until he saved Ichigo's sister Karin from the Hollow attacks that had been instigated by Uryuu's conflict with Ichigo. His power manifested as a Fullbring, Brazo Derecha de Gigante, encasing his right arm in armor, vastly increasing his fighting strength and granting him the ability to fire energy blasts. He later improved his Fullbring, unlocking Brazo Izquierda del Diablo, encasing his left arm in armor capable of delivering a powerful energy-infused punch.

SPOILER ALERT: The following folder is a Walking Spoiler, so all spoilers are unmarked.
Epilogue Characters 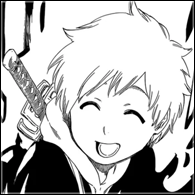 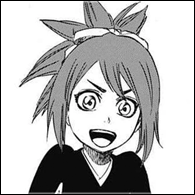 "I'm Ichika Abarai! A Soul Reaper apprentice!"
Species: Soul Reaper
Zanpakuto: Unknown
Ichika Abarai is the daughter of Rukia Kuchiki and Renji Abarai. An apprentice Soul Reaper, she is brash and aggressive, and has a zanpakuto with a lightning bolt-shaped tsuba.