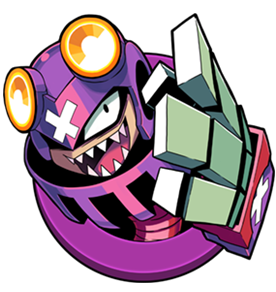 The hero- er, villain himself!

The main character of Nefarious, Crow prides himself on being a Classic Villain. His hobbies include putting damsels in distress, trying to take over the world, and building giant robots to do his bidding. Crow is a professional antagonist and takes his job of organized menace very seriously. 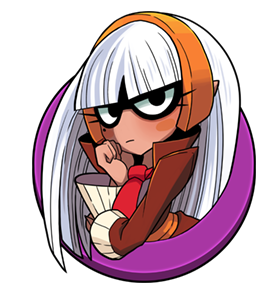 Every villain needs a right-hand assistant.

Crow’s secretary of evil! There is a lot of minutia to running a tyrannical empire. Someone has to keep the HR department running smoothly and make sure the minion healthcare payments are processed in a timely manner. That person is Becky, Crow’s number 2 assistant.

Aboard the Sovereign, Crow's minions await orders from their boss, and aim to assist in his schemes to Take Over the World. Crow can interact with his minions aboard the airship, and even raise their morale by singing karaoke with them.

The patriarch of the family and veteran villain.

Crow's mother. Coyote was once the gunslinging hero of Dusty Gulch until she met and married Buzzard. Now she carries herself as an anti-hero who will do anything good or evil for money.

Crow's older brother. He prefers using brute force and has recently become a father to his own little spawn of evil, Chickadee.

Crow's sister. Now going under the name Brooke, Rook retired from the villain game in order to try and live a normal life.

Crow’s bespectacled brother. Now lives under the name Albert, Owl carries himself as a businessman Running a club where heroes can pay to pretend to rescue princesses.

Crow’s other sister. Lark can be described as having a few screws loose but that doesn’t stop her. 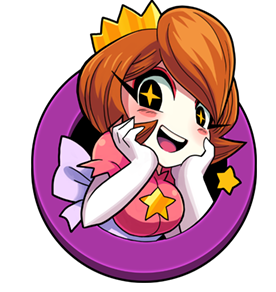 The classic princess.
Click here to see her in her princess knight armor 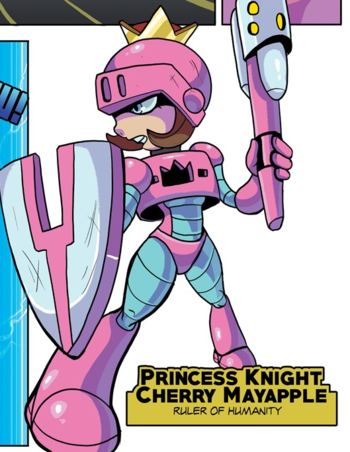 Mayapple loves being a princess and everything that comes with it. She enjoys baking cakes, playing tennis and picnics on sunny days. Being kidnapped is a mild inconvenience to her royal duties, but she never neglects to invite Crow for a day of go-karting. 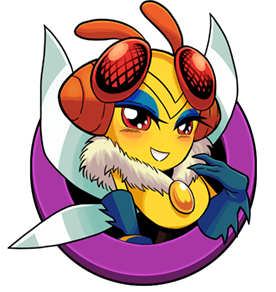 Ruler of the Insectoids.

A hardworking princess who is very diligent about ruling over the Insectoid people. However, she's quick to accept a break from her royal duties. Everyone needs a day off every now and then. 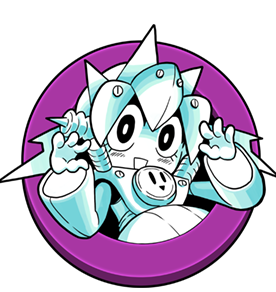 Meet Princess Farrah Day! (Get it?) Not much is known about this little ball of energy. Made in a lab, she's a pinch of elegance, a dash of grace and the essence of royalty. Has science gone too far in its pursuit to develop the perfect princess?

She believes she is being rescued, despite Crow's insisting that it is a kidnapping. Whatever the case she is glad to be out of the lab in which she was created and gladly assists Crow in their escape by super charging his armor and weaponry. 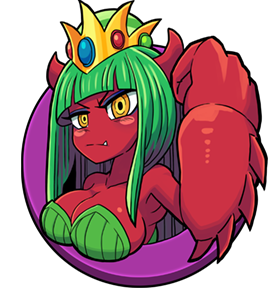 Princess of the Lava Kingdom

Tephra makes her home in the lava kingdoms. A hot-blooded monarch of fire, she is the largest of the known princesses. The ambient temperature around her can exceed 300 degrees! Approach with caution.

The aura her people have around them has a curious effect on Crow's grenades. It superheats them, leaving behind a molten trail which cools into lava rocks that can act as a bridge. You can walk across them, or destroy them. While this can be useful, it's not recommended one stays in close proximity for too long. 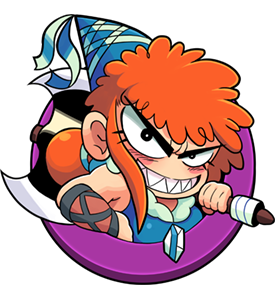 Princess of the Dwarf Kingdom

Ariella knows two things: ruling her kingdom and fighting. A warrior princess at heart, she's not a big fan of the status quo, and woe to any villain who thinks she can be easily swept away from her strict training regiment.

In the kingdom of Winterdown, you don't kidnap the princess, the princess kidnaps you! When Ariella jumps on Crow, he automatically runs forward and can't be stopped. After all, you have no idea what she's going to do with that axe. She loves fighting and adventuring. There is no telling where this particular princess is taking you... 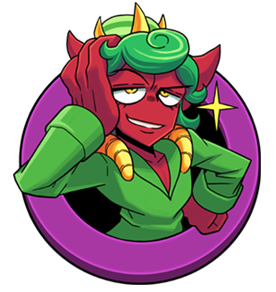 Prince of the Lava Kingdom

After failing to kidnap Princess Tephra - his sister - Crow decides to kidnap him instead. 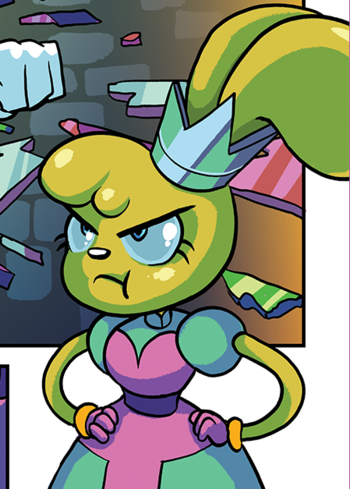 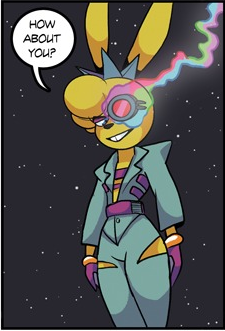 Debuted in the webcomic. The Princess of Kyuutopia, she tries her best to keep her country economically prosperous, which unfortunately makes her unpopular with her subjects.

Debutes in the webcomic. The ruler of the Wa-Verse, she ends up accidentally summoned to the Syndicate of Malice poker night.

The head of the Council of Virtue. 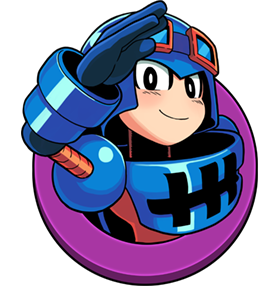 The major hero of Macro City, and a major thorn in Crow's side. He's Crow's long time rival, thwarting his kidnapping attempts at every turn. While Crow is a scheming, cheating, good-for-nothing ne'er do well, Mack is everything he's not: brave, kind, selfless, and most prominently, a paragon. With a guy like him in the way, there's no way Crow can make off with the princess this time- or so he thinks.

The sentient sword wielded by Mack. 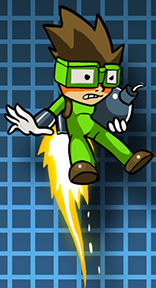 The Bombineer is a hero who, like many heroes, is out to rescue the princess. He lives and dies by his explosives and will not hesitate to throw them right at the fragile glass-encased headwear our villain loves.

Tropes associated with the Bombineer: 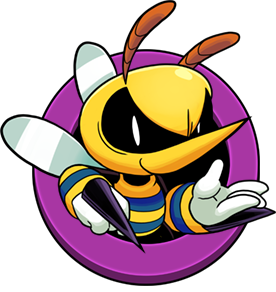 Evil's afoot in the kingdom of Insektia, and that's no good!

Dash is Princess Apoidea's loyal captain of the guard.

Tropes associated with Dash the Bee:
Guryon the Righteous 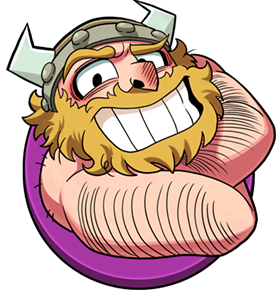 Guryon is the hero of the land of Winterdown, and he's determined to rescue Princess Ariella from Crow's clutches... well, it's more like rescuing Crow from Ariella's clutches, but Guryon is there to face down Crow's diabolical smashing machine nonetheless. 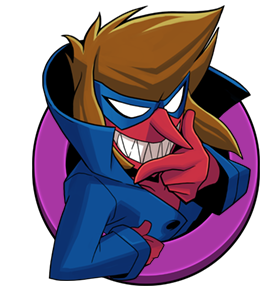 The rugged hero who protects the lava kingdom. Not that the powerful ogres who live there need much protecting. Who knows what this mysterious hero is up to.

The Syndicate of Malice 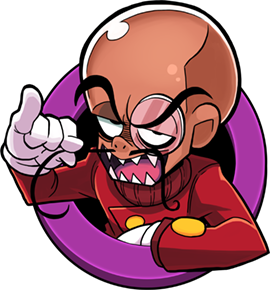 There's more than one supervillain in town!

When Crow arrives in Winterdown to kidnap Princess Ariella and conquer her kingdom, he discovers that he's got competition; rival supervillain Dr. Mechano has the exact same idea! 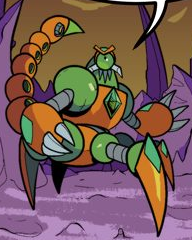 Arch-nemesis of Dash the Bee and Apoidea's (former) frequent kidnapper. 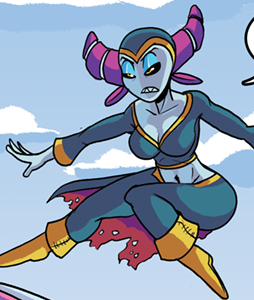 An evil sorceress leading The Syndicate of Malice, and Mayapple's current girlfriend.

The actual Designated Villain of Insectia.