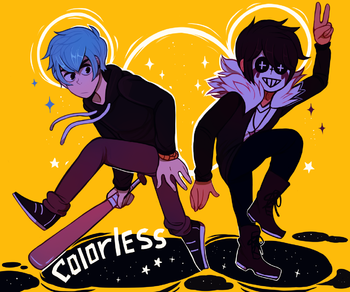 Joki wakes up surrounded by strange-looking nurses in a hospital in the city of Aisho with no recollection of what happened on February the 29th. After being coldly treated by the hospital staff, Joki leaves the hospital and discovers the creatures called the 'animated' that roam the streets. He later meets other humans who also have no memories of February the 29th.

The dark fantasy comic is illustrated and written by Niko and Cokkie, with later animations and panels being colored by Mia. It can be found here

. A mirror can be found here

Ace: It has important information about the city…and all the things you want to know.
Ace: Good job, Jack. You sure JACKED him up real good.
Jack: Shut up Ace.
Ace: Make a wish...and don't drown.