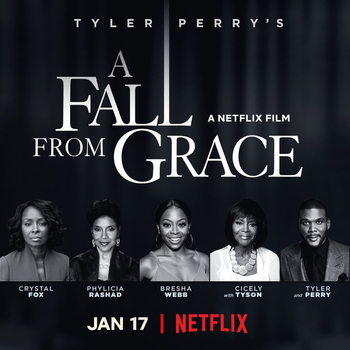 A Fall from Grace is a 2020 American thriller Netflix film produced, written, and directed by Tyler Perry.

Grace Water (Crystal Fox) is under arrest for killing her husband, Shannon (Mehcad Brooks). Jasmine Bryant (Bresha Webb), a public defender, is curious about why Grace killed her husband and tries to figure out what really happened.

Little does she know, not everything appears as it should be...

Tropes in A Fall from Grace: