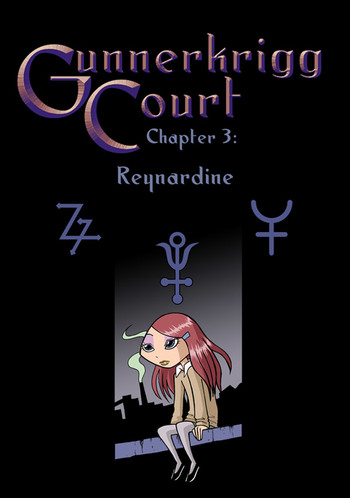 The irritating William Winsbury swipes the ball from Kat in gym class and won't give it back, so Annie judo-flips him. She's told off by the teacher, Mr. Eglamore, although he's impressed by the throw.

At bedtime, Annie and Kat are talking about the incident, and Annie shows Kat her necklace, passed down from her mother, a pendant of the alchemical symbol for antimony. The alarm sounds, and Kat climbs down the ladder to her bunk. Annie grabs her stuffed wolf toy and gets into bed.

Later that night, something crashes through the ceiling of the girls' dorm. The fire alarm sounds, and Mrs. Donlan evacuates the girls. But Annie, sleeping in the top bunk, is missing. She can't get down, because the ladder's gone. She hears a strange noise from outside, and decides to climb onto the roof via the beam that fell through the ceiling, bringing her stuffed wolf with her. She finds a strange creature, howling in pain, with a metal pole thrust through his knee.

The creature mistakes Antimony for someone named Surma, and after he's corrected apologizes and introduces himself as Reynardine. He tells her he's in pain and asks her to stay, because if she leaves the Dragon Slayer, a man seen standing on a far rooftop, will take him away. But the Dragon Slayer won't come as long as Annie is present. Annie wants to know who Reynardine knows named Surma. He instead asks about her stuffed animal, and then notes that she's bleeding. Annie promptly faints from being hit on the head by something when the beam came through the roof. Her necklace falls out of her nightgown, and Reynardine recognizes Annie as Surma's daughter. Which means Surma is dead. The Dragon Slayer approaches. He's Mr. Eglamore.

The next day, Annie wakes up in the infirmary, determined to find the creature on the roof. Kat tells her she should rest, and that she'll see her again after class. Annie instead sneaks out of the infirmary in search of Reynardine. She gets through a sealed door with the help of lockpicks hidden in her stuffed wolf, and finds a train to the large animal holding cells. On the train, she's struck by how huge and deserted the Court is. The holding cells are decorated with a symbol of an eye with a line through it, and she finds Eglamore talking to Reynardine. He shortly leaves, and Annie approaches Reynardine to tell him she wants to help him. Reynardine attempts to possess her, but Eglamore rescues her just in time, and it seems that the spirit has died.

Eglamore reveals Reynardine to be a body-stealing demon, and the body he was initially wearing to be that of a Rogat Orjak named Sivo, a friend of Eglamore's. The Court had tried to find a way to force Reynardine out of Sivo without killing him, but had failed. Eglamore asks Annie to keep what happened a secret, and as she goes to sleep in the repaired dorm that night, she regrets she never got to ask Reynardine about her mother. As she drifts off to sleep, the eyes of her stuffed wolf glow . . .