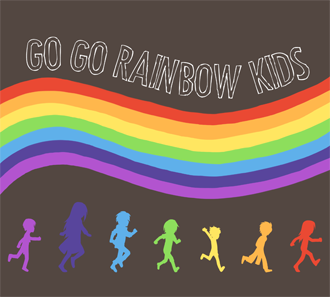 Chibi Color Kids for the win.

on Smack Jeeves) took the base concepts of a show and turned them into an entirely new creation. Instead of Rainbow Land, this story takes place in a world called Eternity- and instead of children, the Color Kids are (mostly) teenagers with very distinct backstories, personalities, relationships, and nationalities.

Did I mention that, aside from the goddesses that created Eternity, basically the entire cast of characters is male?

The cast of characters also includes the dark god Flins (who happens to be much more evil and sadistic than Murky Dismal ever thought of being), and of course this story's version of Rainbow Brite- Rein Bo), though he tends to be less popular than several of the Color Kids. There are also versions of Stormy, Moonglow, and Tickled Pink. Starlite and the other horses are apparently going to make an appearance, though they will be focused on less than the Color Kids. This is definitely not your older sister's Rainbow Brite.

While the story itself has only thus far been made into a conceptual comic, Word of God says that Tanuki Tanuki will one day get around to doing the entire thing. In the meantime, there is a ton of art

in her gallery to convey the gist of the characters and storyline.

Characters in this story provide examples of: