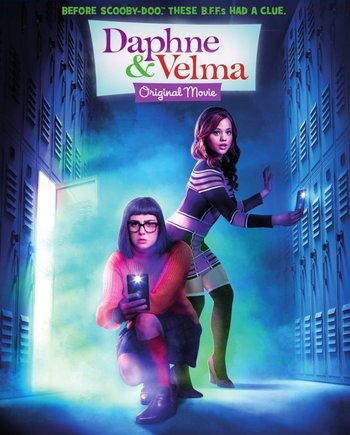 Daphne & Velma is a 2018 direct-to-video film in the Scooby-Doo franchise. It is executive-produced by sisters Jennifer & Ashley Tisdale and her production company, Blondie Girl Productions, and is directed by Suzi Yoonessi (Dear Lemon Lima).

Before their eventual team-up with Scooby and the gang, bright and optimistic Daphne (Sarah Jeffery of Descendants & Shades of Blue) and whip-smart and analytical Velma (Sarah Gilman of Last Man Standing & I Didn't Do It) are both mystery-solving teens who are best friends but have only met online — until now. Daphne has just transferred to Velma’s school, Ridge Valley High, a tech-savvy institute with all the latest gadgets provided by the school’s benefactor, tech billionaire Tobias Bloom. And while competition is fierce among the students for a coveted internship at Bloom Innovative, Daphne and Velma dig beyond all the gadgets and tech to investigate what is causing some of the brightest students in school to disappear — only to emerge again in a zombie-fied state.