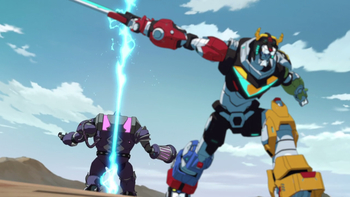 Five robot Lions form together to create one huge robot, what's not awesome about that?

Just like any mecha show, if there are giant robots and it's in space, awesome moments are sure to be in abundance.

Warning: Per wiki policy, Spoilers Off applies to Awesome page. All spoilers will be unmarked.

Knights of Light: Part 2
The End is the Beginning