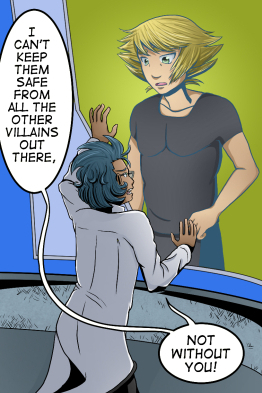 Pictured with blond lifepartner Will.

Dr. Tal A. Kinesis is an aspiring supervillain with telekinetic powers. He's shooting for world domination, with the alleged goal of "creating a world where people can trust each other." He still seems to be struggling after parting ways with his ex-partner William. Can't seem to spit out his feelings for his second-in-command.

Tropes which apply to Kinesis: 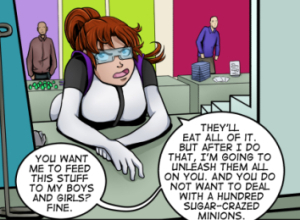 From engineer to leader of the minions.

Kinesis' second in command and engineer, now also the head of the minions (or "Head Minion," though she'd really prefer not to be called that). After being shunted from job to job, she finally found work with Kinesis, the two bonding over their mutual disrespect for society's limits on science. She's very open about her feelings for her boss, but there's not much to be done about them until he can come to terms with his own side of the relationship.

Tropes which apply to Alice: 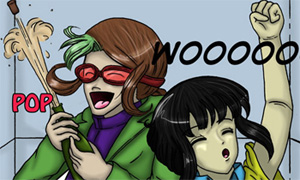 Ladies of the black market

Stan and Will's old college friend who grew up to marry Lime and open a black market for super villains. Helped establish Stan into the world of super villainy.

Tropes which apply to Lemon and Lime:

Lime's wife and partner in crime for their joint black market business for supervillains. Met Stan and Will in college. 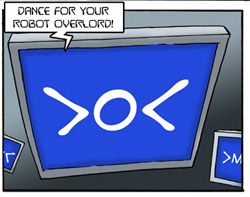 Emoticons have never been so emotive.

Kinesis' prank-loving computer. While it enjoys bossing the minions about and other perks of working in a mad scientist's lab, it does to be increasingly perturbed by Kinesis' descent into villaindom.

In Chapter 8 it was revealed that Computer is the uploaded personality of Stan's former partner, Will.

Tropes which apply to Computer: 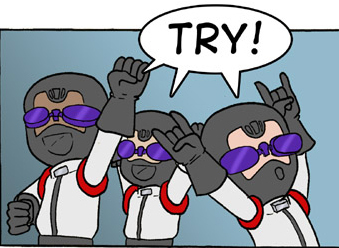 They try. Oh my god do they try.

Kinesis' army of hired help. They all wear matching uniforms and try to follow orders as best they can. Very few stand up as individual characters besides one unfortunate captain and "Patty McLightfoot"

Tropes which apply to The Minions: 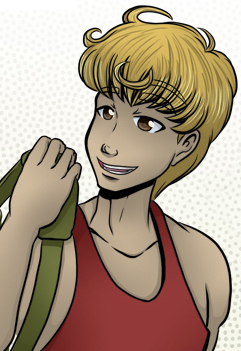 "Well, I always wanted to see people give villains a chance. I mean, you guys need saving, too."

Tropes which apply to Kevin:

Kevin's enthusiastic best friend. His demeanor is composed of equal parts excitement and paranoia. He adamantly supports Kevin's venture into heroics, and was the one to sew Kevin's costume.

Tropes which apply to Maro:

Kevin's other best friend. More practical than Maro, she's concerned about the inherent dangers of the empowered lifestyle. She reportedly engages in rather dubious activities online.

Tropes which apply to Faith:

S Ranked and founding member of The Company active since 1948. Most information regarding him is classified, he is assumed to be some kind of robot. Kinesis got to see him up close and personal once before becoming a villain.

Tropes which apply to Universe Man:

Retired hero and president of the United States of America.

Tropes which apply to Emily: 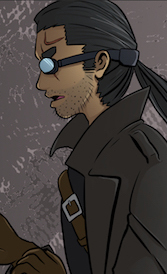 "Why should I tell you? You looking for flaws?

A brooding gun-wielding hero who works with The Company and serves as the president's bodyguard. As a hero he is bulky and scarred due to prospethics and cybernetics, in actuality he is quite small in stature. He is a genius capable of designing "Crosstech" cybernetics, including Kevin's new spine.

Tropes which apply to Agent: 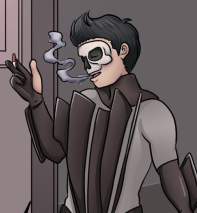 S Ranked hero capable of triggering radioactive combustion. Was responsible for the first Superhero murder trial creating the legal precident of lethal force. The kind of jerk who would smoke on a space station.

Tropes which apply to Blast Radius:

Stella is a high ranking hero in The Company with the powers of a mind witch, a race of humanoids capable of taping into the collective unconscious.

Tropes which apply to Stella:

A high level hero in The Company of Russian descent.

Tropes which apply to Cage Match

An older retired hero who maintains a friendship with Anguish. Taught a human anatomy class in college that Stan and Will attended. He is capable of regenerating any injury.

Anguish is a distinguished villain who keeps a close watch on all the goings on in the hero and villain world. Spends his spare time browsing the internet with the hero fandom.

Tropes which apply to Anguish:

Stanley's best friend and the co-founder of Global Endeavours. During the flashback chapter he was shown to have walked out on the business after Kinesis finished the first design of the upgraded telekenesis chip. He has been shown to still be in contact with Stan though the details of their current relationship have not been made clear yet.

This is later proven to be incorrect, and that he is actually dead, though his personality lives on in Computer.

Tropes which apply to Will: