Film / The Look of Silence 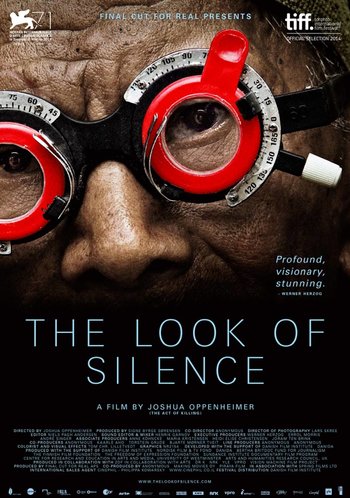 The Look of Silence (Indonesian: Senyap, "Quiet") is a 2014 documentary directed by Joshua Oppenheimer as a companion piece to The Act of Killing.

When the government of Indonesia was overthrown by the military in 1965, numerous paramilitary organisations around the country were mobilised as death squads to wipe out the communists and their political affiliates. One of the victims was a man named Ramli, a farmers' union member in the province of North Sumatra. Ramli's murderers and their ilks would allegedly kill over a million people all over the country, enjoying ties to the military-political elite to the present day while keeping their victims' relatives in terrified silence.

Born shortly after the violence, Adi Rukun never knew his older brother. He lives in the city as a travelling optometrist, alongside the aging men who had once murdered Ramli and thousands of others in cold blood. After decades of silence, he finally decides to look for Ramli's killers and confront them with their past deeds.

, albeit only with Indonesian subtitles.note Most of the movie's dialogue is either in a thick North Sumatran dialect or the Javanese language, making it tricky to understand even for native speakers..