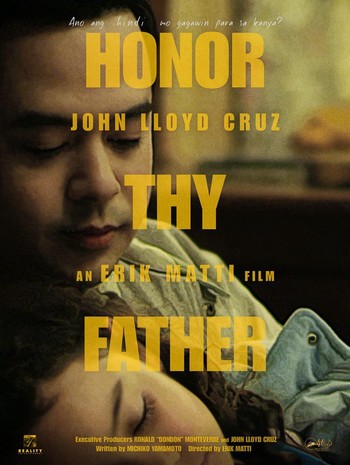 Honor thy Father is a Filipino movie, directed by acclaimed filmmaker Erik Matti (of On the Job fame), and an entry to the 2015 Metro Manila Film Festival. Noted names in Philippine entertainment in this film include: John Lloyd Cruz, who plays the protagonist Edgar; Meryll Soriano as his wife Kaye; and screen veteran Tirso Cruz III as the (somewhat) villainous, but very charismatic, Bishop Tony, leader of the church they attend on Sundays.

Edgar is a simple, devoted family man, who lives with his wife and daughter up in the cool mountains of Baguio City. He wants the best for his family; he drives his one daughter Angel to and from school, and cooperates with his wife Kaye in making and managing their finances, maintaining their home, and—so far uncomplainingly—shoring up family life by attending Sunday services at the Church of Yeshua our Saviour, to which Kaye is a devout member. Edgar joins her in outwardly raising hands and singing with the best of them even if he's fairly skeptical of the whole thing.

The real problems arise when Kaye, as part and parcel of her duties towards her church, promotes her father's complicated investment scheme to her fellow parishioners, who buy into it willingly. All seems well and good until her father turns up murdered, and the money disappears. And that's really bad news: Kaye is blamed for swindling the money, and she ends up in debt to, and offending, some pretty powerful people, some of whom aren't above levelling death threats—and actual guns—at her whole family.

And now Edgar has to help set things right. Even if it means getting a gun of his own and turning to a life of crime. He'll need to get back that money, by hook or by crook, because really, at this point, what has his family got left to lose.