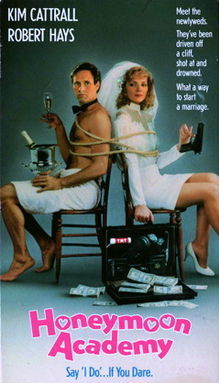 1990 romantic comedy/spy film involving a happily newlywed couple on their honeymoon in Spain, wherein the husband, Sean, discovers that his blushing bride, Chris, is in fact a government agent. Although she retired upon her marriage to Sean, Chris' old flame Alex blackmails her into helping him recover some counterfeit printing plates from a man named Lazos. Secretly after the playes as well as an ineffectual crime boss name Marls and his equally ineffectual henchmen, Slack and Lance, as well as violent sociopath Pitt.This film contains examples of: