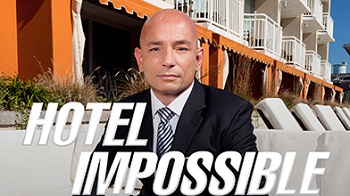 He's Anthony Melchiorri. When hotels are in trouble, they call him.
Advertisement:

Hotel Impossible is a reality TV show on Travel Channel starring Anthony Melchiorri, a hotel consultant, who visits hotels that are in a bad state and need help. He gives the owner(s) and staff the tools necessary to fix their problems, and renovates a room and/or another area of the hotel.