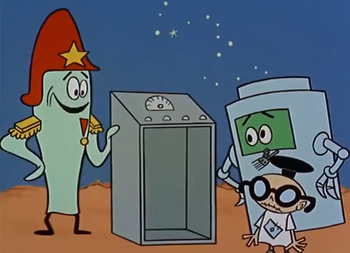 Felix is babysitting Poindexter at Professor's lab again, and Poinsy announces he's just discovered a new element, Dry Water. Professor shows up and tells his nephew to stop playing with the dangerous chemicals. Poinsy asks to do, and Professor says to do anything else, like look at the stars. Poinsy looks out the observatory window at Mars, and ponders what the Master Cylinder is up to. On Mars, Master Cylinder and General Clang have a bunch of rocket ships ready to invade the Earth, but have no rocket fuel to power them. Clang announces his plan to get rocket fuel formula, but Master scoffs at this, pointing out that it's locked in the brain of Poindexter. Clang then pulls out a crude robotic copy of Poindexter and lets it wander around, only for it to fall over and need adjustment. Clang then shows an even better invention to go with it—the Tele-Exchanger, a device that can exchange objects via teleportation at great distances. Clang puts the robot Poindexter and tunes the coordinates to the real Poindexter, using it to exchange the two between places. On cue, the real Poindexter appears, and he is taken captive by Master Cylinder and Clang. Back on Earth, Felix tells Poinsy its his bedtime, but finds out about the robot impersonator left in his place, and he immediately deduces that its the work of Master Cylinder. On Mars, Master orders Poindexter to get to work on the secret rocket fuel formula, but he refuses, saying he's lonesome and wants his babysitter Felix there with him. They comply, and Clang exchanges the real Felix with a ragdoll of him. On Earth, Professor finds out Felix and Poindexter have gone missing, and wonders what happened to them.

Felix arrives on Mars, and Poindexter fills him in on what's going on. Master Cylinder orders Poinsy to get to work while they show Felix around Mars. When Poinsy is gone, Master orders Clang to catch Felix, but Felix escapes. Master calls off Clang, believing that Felix will either starve or go mad from the talking rocks on Mars. Far away, Felix muses about how Mars is nothing but rocks, but an unseen voice tells him to cheer up. Felix asks who said that, and the voice turns out to be coming from a rock, who is actually a martian in disguise. The martian asks Felix what's his problem, and Felix asks how he can rescue Poindexter. The martian suggests simply using a rock disguise, and Felix rolls with it (literally, he rolls away). Back at the lab, Poindexter mixes up a potion that blows up in his face yet again, much to Master Cylinder's exasperation. Poinsy falls onto Felix, smashing his disguise. Just then, an avalanche stars forming down a mountain, and Master Cylinder and Clang flee. Felix and Poindexter jump into the Tele-Exchanger and return to Earth, reappearing in front of Professor, much to his bewilderment. The scientist faints in shock, and Felix laughs as the cartoon irises out.