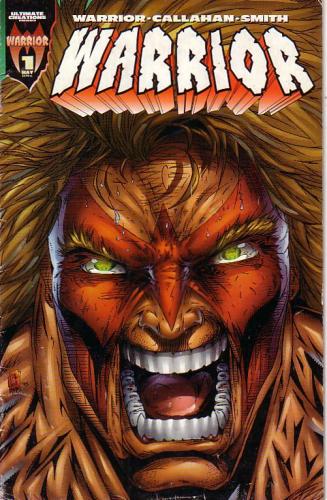 "...The higher self knows only to guard the self from the damage weapons of emotion can sometimes cause. Survival by its protection, my destiny has been to be who I am — WARRIOR!"
— Excerpt from the intro to the comic, and also the most legible part.
Advertisement:

Warrior is a short-lived comic by Team Warrior (conceived and written by WWE wrestler Ultimate Warrior, with Jonathan D. Smith, James Callahan and The Sharp Boys on the art department). It depicts the adventures of the Warrior, his quest to master the philosophy of "Destrucity" and journey through the Terrain of Testament to set right what was wronged. On the surface, it sounds like a simple story, but deep down it is a horribly mangled combination of Michael Moorcock-inspired fantasy, Sun Tzu-styled ramblings, bad artwork à la Rob Liefeld and a convoluted plot that makes the ending of Neon Genesis Evangelion look simple in comparison.

Not related to the 2011 film Warrior or the British comic anthology magazine of the same name.