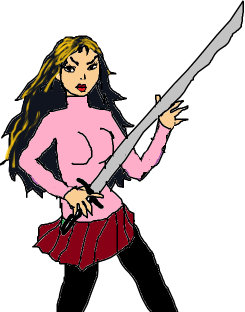 Rebecca Swansin and her Anti-Rape Katana.
"But it hd no efect becuz outsied the gunfite wuz stil going on and insied we were so no sound bullits becuz gun cant sownd"
Advertisement:

. It and its sequel, of which only the first chapter has been posted, has been largely ignored since their creation in 2010. However, ever since Serkadios started snarking it

, the fic has gained a following in the Twilight Sucks snarking community (who are rather famous for creating numerous headcanons of badfics, even going so far as to create an expanded universe for a certain fanfic).

The fic is divided up into three story arcs so far.

Honestly, this fic is a lot better than you'd think, if you're looking for trollfic lulz. It also provides quite a few opportunities for fun headcanons.