"ok hello everyone I want to let you knwo that I'm the BIGGEST Twilight ever! I've read all the boks and seen da movie -OMFG isn't Cullin HAWT. So hot. ok now iv writon a storie about wut wold happen id I were bella1 Because shes a dirte bithc so i want you to see it and tel moi what you think!! So LOTS OF REVOWS PLZ! lov you God xoxoxoxo"
The beginning of Brewdening Love

. And it's all downhill from there.
Advertisement: 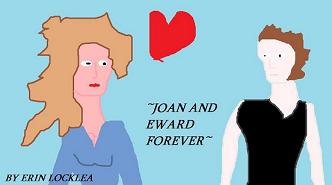 Brewdening Love is an infamous Twilight fanfiction written by Erin Locklea, aka Erin of the Cullen Clan, and is another in the line of My Immortal-esque fanfics. It stars Joan St. Sanctuary Louisa-Smith and is so filled with spelling errors that it might as well be in cuneiform.

The story begins with Joan walking into her English class and suddenly noticing a boy named Edward (Edwerd, Edwad, Ward, etc.) whom she thinks looks like a god (not god God because I luv god and thats blamsphemi, so fuc off sinars). After giving a long description of herself, she tries to flirt with him but he ignores her. Because he's incredibly sex-ah, she forgives him and decides that, because he is so hot, she wants to be his boyfriend. Yes, boyfriend.

Edward continues to ignore her and she continues to stalk him, going so far as to chase him into the school car lot with him screaming at her to go away. While she contemplates horrid thought that maybe he doesn't like her, a bus appears out of nowhere and almost hits her. To the readers' dismay and chagrin, it does not flatten her; instead, a mysterious somebody who she thinks was Edward because "there wore amba eyes glisening in the doost!" saves her in the nick of time. She confronts him later and they magically fall in love.

But trouble is on the horizon as it is revealed that Edward is a VAMPTRE! As a devout Chrisnt, Joan is worried. And that bit of potential conflict is shoved in the closet when Edward says that he is a "christina vampite" and therefore okay for her to date. Yeah.

The gripping epic follows their twu wuv as Erin encounters the rest of the Cullens, the problem vamtpie Jhams, and searches the entire country of Canada in twenty minutes. Damn, that Volvo is fast.

Ousted off of fanfiction.net for its spelling, grammar, and Unfortunate Implications here