Fanfic / Captain Avatar and the Avateers 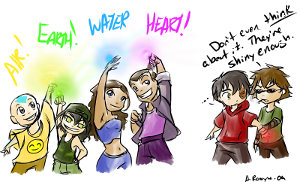 Jet lies.
Looting and Polluting is not the way, Zuko!

Based on a running fandom joke, Captain Avatar is a series of interconnected comment fics written by suzukiblu on LiveJournal that places the characters from Avatar: The Last Airbender into the roles of the Planeteers from Captain Planet. There are just under fifty commentfics written for the universe.

Unrelated to the Captain Avatar of Star Blazers.

Captain Avatar and the Avateers provides examples of: