Theatre / The Light in the Piazza 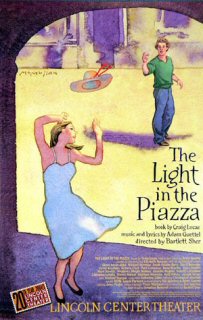 The Meet Cute
The Light in the Piazza is a musical based on a 1960 novella by Elizabeth Spencer, with a book by Craig Lucas and music and lyrics by Adam Guettel. It ran on Broadway from 2005-2006 and was nominated for 11 Tony Awards, winning six of them, including Best Leading Actress in a Musical. Shortly before closing, it was filmed as part of PBS' Live from Lincoln Center series.
Advertisement:

It's 1953 and Margaret Johnson and her daughter, Clara, are on vacation in Italy. On their first day in Florence, Clara's hat is blown off by a gust of wind and is caught by a young Italian man named Fabrizio Naccarelli. Clara and Fabrizio are instantly attracted to each other, but Margaret attempts to quell it. Fabrizio manages to turn up in all the places the Margaret and Clara are visiting, until Margaret's resolve is worn down. But as Fabrizio and Clara become more serious about each other, Margaret fears that a dark secret about Clara will be revealed.

The novella was adapted into a non-musical 1962 feature film, Light in the Piazza, starring Olivia de Havilland as Meg, Yvette Mimieux as Clara, and George Hamilton as Fabrizio.

This production includes examples of: